Based on events in Wichita, the Wall Street Journal wrote “What Americans seem to want most from government these days is equal treatment. They increasingly realize that powerful government nearly always helps the powerful …” But Wichita’s elites don’t seem to understand this. 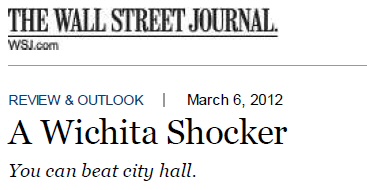 Three years ago from today the Wall Street Journal noted something it thought remarkable: a “voter revolt” in Wichita. Citizens overturned a decision by the Wichita City Council regarding an economic development incentive awarded to a downtown hotel. It was the ninth layer of subsidy for the hotel, and because of our laws, it was the only subsidy that citizens could contest through a referendum process.

In its op-ed, the Journal wrote:

The elites are stunned, but they shouldn’t be. The core issue is fairness — and not of the soak-the-rich kind that President Obama practices. One of the leaders of the opposition, Derrick Sontag, director of Americans for Prosperity in Kansas, says that what infuriated voters was the veneer of “political cronyism.”

What Americans seem to want most from government these days is equal treatment. They increasingly realize that powerful government nearly always helps the powerful, whether the beneficiaries are a union that can carve a sweet deal as part of an auto bailout or corporations that can hire lobbyists to write a tax loophole.

The “elites” referred to include the Wichita Metro Chamber of Commerce, the political class, and the city newspaper. Since then, the influence of these elites has declined. Last year all three campaigned for a sales tax increase in Wichita, but voters rejected it by a large margin. It seems that voters are increasingly aware of the cronyism of the elites and the harm it causes the Wichita-area economy.

Last year as part of the campaign for the higher sales tax the Wichita Chamber admitted that Wichita lags in job creation. The other elites agreed. But none took responsibility for having managed the Wichita economy into the dumpster. Even today the local economic development agency — which is a subsidiary of the Wichita Chamber — seeks to shift blame instead of realizing the need for reform. The city council still layers on the levels of subsidy for its cronies.

“Local politicians like to get in bed with local business, and taxpayers are usually the losers. So three cheers for a voter revolt in Wichita, Kansas last week that shows such sweetheart deals can be defeated.” So starts today’s Wall Street Journal Review & Outlook editorial (subscription required), taking notice of the special election last week in Wichita.

The editorial page of the Wall Street Journal is one of the most prominent voices for free markets and limited government in America. Over and over Journal editors expose crony capitalism and corporate welfare schemes, and they waste few words in condemning these harmful practices.

The three Republican members of the Wichita City Council who consider themselves fiscal conservatives but nonetheless voted for the corporate welfare that voters rejected — Pete Meitzner (district 2, east Wichita), James Clendenin (district 3, southeast and south Wichita), and Jeff Longwell (district 5, west and northwest Wichita) — need to consider this a wake up call. These members, it should be noted, routinely vote in concert with the Democrats and liberals on the council.

For good measure, we should note that Sedgwick County Commission Republicans Dave Unruh and Jim Skelton routinely — but not always — vote for these crony capitalist measures.

The Wichita business community, headed by the Wichita Metro Chamber of Commerce endorsed this measure, too.

Hopefully this election will convince Wichita’s political and bureaucratic leaders that our economic development policies are not working. Combined with the startling findings by a Tax Foundation and KMPG study that finds Kansas lags near the bottom of the states in tax costs to business, the need for reform of our spending and taxing practices couldn’t be more evident. It is now up to our leaders to find within themselves the capability to change — or we all shall suffer.