A truthful accounting of the finances of Intrust Bank Arena in downtown Wichita shows a large loss.

The true state of the finances of the Intrust Bank Arena in downtown Wichita are not often a subject of public discussion. Arena boosters cite a revenue-sharing arrangement between the county and the arena operator, referring to this as profit or loss. But this arrangement is not an accurate and complete accounting, and it hides the true economics of the arena. What’s missing is depreciation expense.

There are at least two ways of looking at the finance of the arena. Nearly all attention is given to the “profit” (or loss) earned by the arena for the county according to an operating agreement between the county and ASM Global, a company that operates the arena. SMG, the former operator of the arena, merged with another company to form ASM Global.

This agreement specifies a revenue sharing mechanism between the county and ASM. For 2109, the accounting method used in this agreement produced a profit, or “net building income,” of $1,021,721 to be split (not equally) between SMG and the county. The county’s share was $310,861. (1)The Operations of INTRUST Bank Arena, as Managed by ASM Global. Independent Auditor’s Report and Special-Purpose Financial Statements. December 31, 2019. Available here.

While described as “profit” by many, this payment does not represent any sort of “profit” or “earnings” in the usual sense. In fact, the introductory letter that accompanies these calculations warns readers that these are “not intended to be a complete presentation of INTRUST Bank Arena’s financial position and results of operations in conformity with accounting principles generally accepted in the United States of America.” (2)Ibid, page 2. 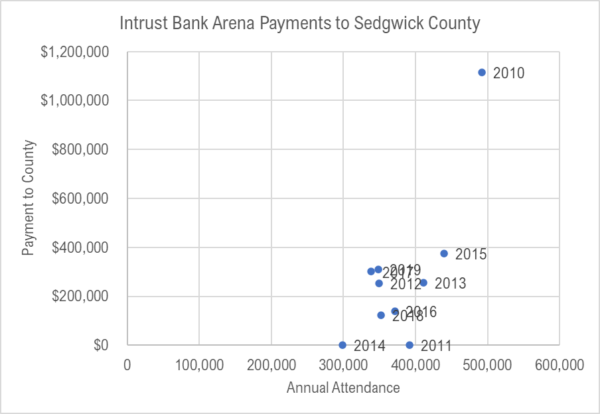 A much better reckoning of the economics of the Intrust Bank Arena can be found in the 2019 Comprehensive Annual Financial Report for Sedgwick County. (3)Sedgwick County. Comprehensive Annual Financial Report of the County of Sedgwick, Kansas for the Year ended December 31, 2019. Available at https://www.sedgwickcounty.org/finance/comprehensive-annual-financial-reports/. This document holds additional information about the finances of the Intrust Bank Arena. The CAFR, as described by the county, “… is a review of what occurred financially last year. In that respect, it is a report card of our ability to manage our financial resources.” 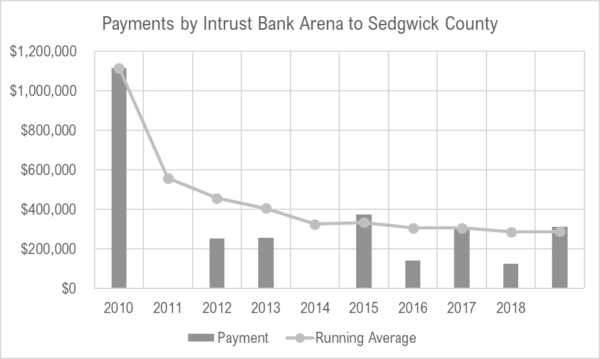 Regarding the arena in 2019, the CAFR states:

The Arena Fund represents the activity of the INTRUST Bank Arena. The facility is operated by a private company; the County incurs expenses only for certain capital improvements or major repairs and depreciation, and receives as revenue only a share of profits earned by the operator, if any, and naming rights fees. The Arena Fund had an operating loss of $5.0 million. The loss can be attributed to $5.0 million in depreciation expense. 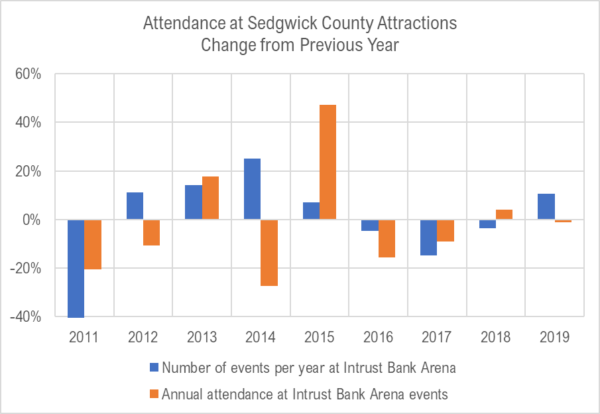 But not many of our civic leaders recognize this, at least publicly. We — frequently — observe our governmental and civic leaders telling us that we must “run government like a business.” The county’s financial report makes mention of this: “Sedgwick County has one business-type activity, the Arena fund. Net position for fiscal year 2019 decreased by $5.0 million to $146.6 million. Of that $146.6 million, $138.9 million is invested in capital assets. The decrease can be attributed to depreciation, which was $5.0 million.” (4)CAFR, page A-10. (emphasis added)

At the same time, these leaders avoid frank and realistic discussion of economic facts. As an example, in years past Commissioner Dave Unruh made remarks that illustrate the severe misunderstanding under which he and almost everyone labor regarding the nature of spending on the arena: “I want to underscore the fact that the citizens of Sedgwick County voted to pay for this facility in advance. And so not having debt service on it is just a huge benefit to our government and to the citizens, so we can go forward without having to having to worry about making those payments and still show positive cash flow. So it’s still a great benefit to our community and I’m still pleased with this report.”

The contention — witting or not — is that the capital investment of $183,625,241 (not including an operating and maintenance reserve) in the arena is merely a historical artifact, something that happened in the past, something that has no bearing today. There is no opportunity cost, according to this view. This attitude, however, disrespects the sacrifices of the people of Sedgwick County and its visitors to raise those funds. Since Kansas is one of the few states that adds sales tax to food, low-income households paid extra sales tax on their groceries to pay for the arena — an arena where they may not be able to afford tickets.

Any honest accounting or reckoning of the performance of Intrust Bank Arena must take depreciation into account. While Unruh is correct that depreciation expense is not a cash expense that affects cash flow, it is an economic reality that can’t be ignored — except by politicians, apparently. The Wichita Eagle and Wichita Business Journal aid in promoting this deception.

The upshot: We’re evaluating government and making decisions based on incomplete and false information, just to gratify the egos of self-serving politicians and bureaucrats.

In February 2015 the Wichita Eagle reported: “The arena’s net income for 2014 came in at $122,853, all of which will go to SMG, the company that operates the facility under contract with the county, Assistant County Manager Ron Holt said Wednesday.” A reading of the minutes for the February 11 meeting of the Sedgwick County Commission finds Holt mentioning depreciation expense not a single time. Neither did the Eagle article.

The Wichita Eagle opinion page hasn’t been helpful, with Rhonda Holman opining with thoughts like this: “Though great news for taxpayers, that oversize check for $255,678 presented to Sedgwick County last week reflected Intrust Bank Arena’s past, specifically the county’s share of 2013 profits.” (For some years, the county paid to create a large “check” for publicity purposes.)

That followed her op-ed from a year before, when she wrote: “And, of course, Intrust Bank Arena has the uncommon advantage among public facilities of having already been paid for, via a 30-month, 1 percent sales tax approved by voters in 2004 that actually went away as scheduled.” That thinking, of course, ignores the economic reality of depreciation.

In 2018, the Wichita Eagle reported, based on partial-year results: “Intrust Bank Arena remains profitable but is reporting a 20 percent drop in income this year, despite a bump from the NCAA March Madness basketball tournament. Net income for the first three quarters of this year was about $556,000. That’s down from just shy of $700,000 last year, according to a report to the Sedgwick County Commission.” (5)Lefler, Dion. Despite March Madness, Intrust Bank Arena profit down 20 percent. December 7, 2018. Available at https://www.kansas.com/news/politics-government/article222300675.html. This use of “profitable” is based only on the special revenue-sharing agreement, not generally accepted accounting principles.

Even our city’s business press — which ought to know better — writes headlines like Intrust Bank Arena tops $1.1M in net income for 2015 without mentioning depreciation expense or explaining the non-conforming accounting methods used to derive this number.

All of these examples are deficient in an important way: They contribute confusion to the search for truthful accounting of the arena’s finances. Recognizing depreciation expense is vital to understanding profit or loss, we’re not doing that. 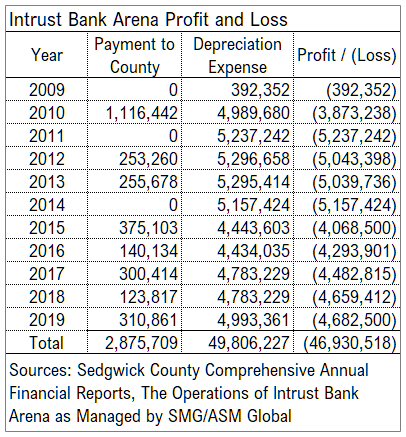 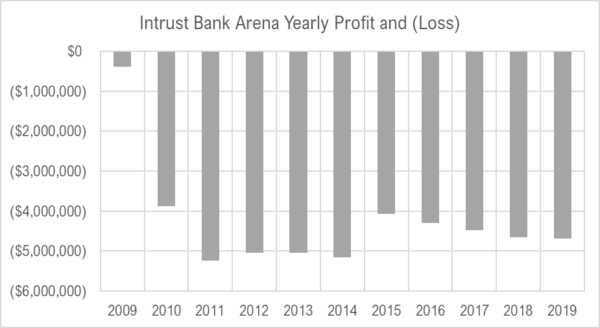 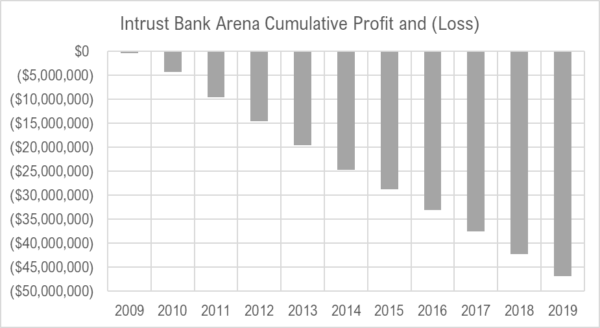