What is the import of the farm bill to Kansas? 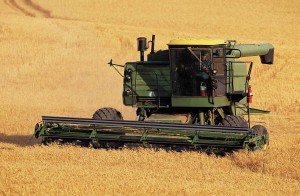 Correcting the Wichita Eagle’s facts will place the importance of the farm bill to Kansas in proper perspective.

The Eagle editorialist didn’t specify what she meant by “percent of the economy” or where she got these figures. But the most common measure of the size of an economy is gross domestic product (GDP), and it’s easy to find.

Data from the Bureau of Economic Analysis (part of the U.S. Department of Commerce) for 2012 tells us that the category “Agriculture, forestry, fishing, and hunting” contributed $5,428 million towards the total Kansas GDP of $138,953 million. That means agriculture contributed 3.9 percent to Kansas GDP. The Eagle based its argument on a value of 25 percent, a value that’s 6.4 times the actual value.

If you included the category “Food and beverage and tobacco product manufacturing” you’d add a few additional percentage points. But you’d still have a number that is just a fraction of what the Eagle editorial board believes to be the contribution of agriculture to the Kansas economy.

Now that you have the facts that the Wichita Eagle doesn’t have, how important do you think is the farm bill to Kansas?

Besides this, the Eagle praised former U.S. Senator Bob Dole for his “effort to bind rural and urban interests in agricultural policy by including food stamps in the nation’s safety net for farmers.” In political science this is called logrolling. It’s one of the reasons why government continues to grow faster than our willingness to pay for it. I think the Wichita Eagle likes that.

It’s for things like this that Dan Mitchell created the “Bob Dole Award” for Misguided Conservatives. It’s for those who fit this description:

“If you say something about fiscal policy and a statist can respond by saying “I agree, so let’s raise taxes,” then you’ve made the mistake of focusing on red ink rather than the real problem of too much government spending.”

Mitchell explains the naming of the award:

Naming the award after Bob Dole also is appropriate since he was never a sincere advocate of limited government. The Kansas lawmaker was a career politician who said in his farewell speech that his three greatest achievements were a) creating the food stamp program, b) increasing payroll taxes, and c) imposing the Americans with Disabilities Act (no wonder I wanted Clinton to win in 1996).

For all of these reasons, and more, no real conservative should want to win an award linked to Bob Dole.