This week the Wichita City Council will consider granting economic development incentives to Cessna Aircraft Company. The incentives are in the form of property (ad valorem) tax relief, implemented through the city’s Industrial Revenue Bond program, as described by city documents:

Since 1991, the City Council has approved issuance of Industrial Revenue Bonds (“IRBs”) totaling $1.2 billion to finance expansion and modernization of Cessna Aircraft Company (“Cessna”) facilities in Wichita. The City Council also authorized 100% ad valorem tax exemptions for all bond-financed property for periods of up to ten years.

The city does this for economic development, which in the eyes of politicians and bureaucrats, means jobs. Highly visible jobs, hopefully, that voters will be grateful for. So we might want to examine the record of job creation by Wichita’s economic development machinery. (We should note that Cessna is not the only aircraft company that Wichita has been generous to with subsidy.)

The Bureau of Economic Analysis, which is part of the U.S. Chamber of Commerce, provides economic data for metropolitan areas. One of the measures that Visioneering Wichita uses as a benchmark of performance is personal income growth. Specifically, per capita personal income growth. There are some issues related to per capita measures that require caution; see Wichita and peer GDP growth for an explanation. 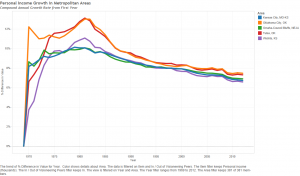 Considering personal income growth, here is what Wichita looks like compared to our Visioneering peer cities, based on data from BEA (click on charts for larger versions). 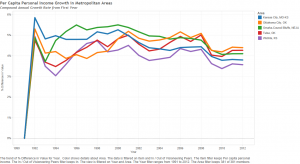 Since Visioneering uses per capita personal income, I also present it. This time, I start the chart with 1990 data. It’s much the same story as the previous chart: Wichita is in last place.

Another benchmark Visioneering uses (but won’t present to the council) is job growth. Wichita does poorly here too, ranking in last place among our Visioneering peer cities except in one area: Government jobs. See Wichita job growth and Visioneering peers for details and a video. We should note that to the extent the government sector grows faster than the private sector, we become poorer.

We might ask the mayor and council members how this proposed action will help Wichita catch up to its self-identified peers. After all, city documents state that we’ve granted IRBs to Cessna in the past: $1,200,000,000 worth, according to city documents. The action contemplated this week is for up to $40,200,000 in bonds, or about three percent of the total granted to Cessna. These amounts are not loans to Cessna from the city, but instead represent the value of property that Cessna may have exempted from taxation: property and possibly sales taxes both.

Other companies have received similar treatment, and not always with good results. After the announcement of Boeing leaving in 2012, a news report contained this: “‘They weren’t totally honest with us,’ said [Wichita Mayor Carl] Brewer of Boeing, which has benefited from about $4 billion of municipal bonds and hundreds of millions of dollars in tax relief. ‘We thought the relationship was a lot stronger.'”

The problem with this action

A major reason why this action is harmful to the Wichita economy is its strangling effect on entrepreneurship and young companies. As Cessna and other similarly-situated companies escape paying taxes, others have to pay. This increases the burden of the cost of government on everyone else — in particular on the companies we need to nurture. This is being brought into sharp relief as the council considers asking Wichita voters to approve a sales tax increase.

Last month the Wichita Metro Chamber of Commerce featured a speaker who stressed the importance of entrepreneurship, as evidenced by the headline in the Wichita Eagle: Gallup CEO tells Wichita Chamber: Treat entrepreneurs like star athletes.

There’s plenty of other evidence that entrepreneurship, in particular young business firms, are the key to economic growth. But Wichita’s economic development policies, as evidenced by this action the council is considering, are definitely stacked against the entrepreneur. As Wichita props up its established industries, it makes it more difficult for young firms to thrive. Wichita relies on targeted investment in our future. Our elected officials and bureaucrats believe they have the ability to select which companies are worthy of public investment, and which are not. It’s a form of centralized planning by the state that shapes the future direction of the Wichita economy.

These targeted economic development efforts fail for several reasons. First is the knowledge problem, in that government simply does not know which companies are worthy of public investment. This lack of knowledge, however, does not stop governments from creating policies for the awarding of incentives. This “active investor” approach to economic development is what has led to companies receiving grants or escaping hundreds of millions in taxes — taxes that others have to pay. That has a harmful effect on other business, both existing and those that wish to form. Young entrepreneurial companies are particularly vulnerable. 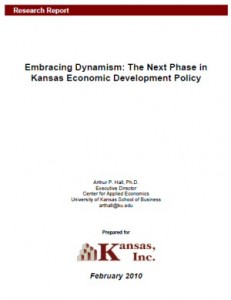 Professor Art Hall of the Center for Applied Economics at the Kansas University School of Business is critical of this approach to economic development. In his paper Embracing Dynamism: The Next Phase in Kansas Economic Development Policy, Hall quotes Alan Peters and Peter Fisher: “The most fundamental problem is that many public officials appear to believe that they can influence the course of their state and local economies through incentives and subsidies to a degree far beyond anything supported by even the most optimistic evidence. We need to begin by lowering expectations about their ability to micro-manage economic growth and making the case for a more sensible view of the role of government — providing foundations for growth through sound fiscal practices, quality public infrastructure, and good education systems — and then letting the economy take care of itself.”

In the same paper, Hall writes this regarding “benchmarking” — the bidding wars for large employers: “Kansas can break out of the benchmarking race by developing a strategy built on embracing dynamism. Such a strategy, far from losing opportunity, can distinguish itself by building unique capabilities that create a different mix of value that can enhance the probability of long-term economic success through enhanced opportunity. Embracing dynamism can change how Kansas plays the game.”

(For a summary of the peer-reviewed academic research that examines the local impact of targeted tax incentives from an empirical point of view, see Research on economic development incentives. A sample finding is “General fiscal policy found to be mildly effective, while targeted incentives reduced economic performance (as measured by per capita income).”

There is also substantial research that is it young firms — distinguished from small business in general — that are the engine of economic growth for the future. We can’t detect which of the young firms will blossom into major success — or even small-scale successes. The only way to nurture them is through economic policies that all companies can benefit from. Reducing tax rates for everyone is an example of such a policy. Abating taxes for specific companies through programs like the Wichita city council is considering for Cessna is an example of precisely the wrong policy.

In explaining the importance of dynamism, Hall wrote: “Generally speaking, dynamism represents persistent, annual change in about one-third of Kansas jobs. Job creation may be a key goal of economic development policy but job creation is a residual economic outcome of business dynamism. The policy challenge centers on promoting dynamism by establishing a business environment that induces business birth and expansion without bias related to the size or type of business.”

We need to move away from economic development based on this active investor approach, especially the policies that prop up our established companies to the detriment of dynamism. We need to advocate for policies — at Wichita City Hall, at the Sedgwick County Commission, and at the Kansas Statehouse — that lead to sustainable economic development. We need political leaders who have the wisdom to realize this, and the courage to act appropriately. Which is to say, to not act in most circumstances.