The real war on Kansas workers

“What workers decide to do with their paychecks is none of the Government’s business.”

Isn’t that a wonderful statement? It succinctly states the libertarian principle of self-ownership, which is that each person owns themselves and the fruits of their labor. Their paychecks, in this case. The author says that government has no business deciding how workers spend their pay, which I would interpret as meaning that government has no business levying taxes on income. 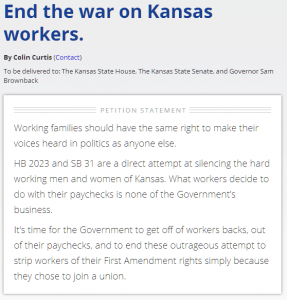 But I don’t think that’s what the author of this sentence meant.

Instead, the author of this statement wants more of Kansas workers’ paychecks diverted to government though taxation. That’s how the groups he’s represented are paid, and they always want more.

This statement comes from a petition at SignOn.org started by Colin Curtis, a Kansas political activist who has worked for public employee organizations. It’s in response to a bill that provides, in part, “It shall be unlawful for any professional employees’ organization, as defined in K.S.A. 72-5413, and amendments thereto, to use any dues, fees, assessments or any periodic payments deducted from a member’s paycheck for the purpose of engaging in political activities as defined in subsection (c).”

If this bill becomes law, public employee unions won’t be able to have government deduct these payments for them. They’ll have to fundraise like everyone else.

But if all you read was the petition that Curtis started, you’d think the bill does much more: “It’s time for the Government to get off of workers backs, out of their paychecks, and to end these outrageous attempt to strip workers of their First Amendment rights simply because they chose to join a union.”

A paycheck deduction isn’t a first amendment right. Not even close.

But I do understand why public employee unions like Kansas National Education Association (KNEA), our state’s teachers union, are worried about this legislation. If their members had to consciously make donations for political purposes (instead of automatic deduction), teachers might start wondering if the union is really worthwhile.

And I do agree with Curtis when he writes “It’s time for the Government to get off of workers backs.”

I wish he and Kansas public employee union leadership really meant this.

I received a great deal of correspondence on this issue with most of it coming from outside the district. There was some confusion and misinformation about the legislation’s contents, which is to simply ban state or other units of government from making payroll deductions for members of public sector unions for the purpose of contributing to the union’s political action committee. For purpose of simple clarification:

Some misinformation that I have seen:

My husband is a member of a public employee organization. This bill will not stop his dues being paid by paycheck deduction. This bill does not impact in any way his ability to advocate for or against an issue or legislation. It does not stop his organization from lobbying on legislation before the Legislature. It will only stop our family from contributing to a political action committee by way of a paycheck deduction.

I voted Yes on 2023. It is inappropriate for the state or any unit of government to be in the business of making payroll deductions for political purposes.