Those such as Kansas House of Representatives Minority Leader Paul Davis who uncritically tout Kansas schools as among the best in the nation are harming both students and taxpayers when they fail to recognize why Kansas performs well compared to other states. 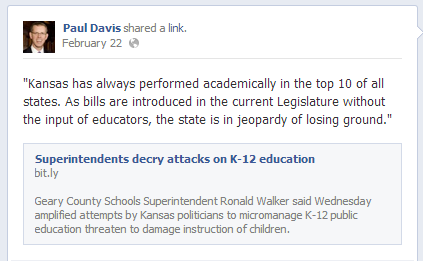 Davis recently posted on his Facebook page a quote from Geary County schools superintendent Ronald Walker: “Kansas has always performed academically in the top 10 of all states. As bills are introduced in the current Legislature without the input of educators, the state is in jeopardy of losing ground.”

Kansas does perform well compared to other states on the National Assessment of Educational Progress (NAEP), known as “The Nation’s Report Card.” Nearby is a table showing scale scores for Kansas and National Public schools for math and reading in grades four and eight. Looking at the top row, which reports scores for all students, it is the case that Kansas does better than the national average in all cases.

But if we look at the data separated by racial/ethnic subgroups, something different becomes apparent: Kansas lags behind the national average in some of these areas.

Why is there this apparent discrepancy? In general, white students perform better than black and Hispanic students. Kansas has a much higher proportion of white students than the nation. In Kansas, about 69 percent of students are white, compared to 53 percent for the entire nation.

Some may say that it’s racist to talk about student achievement in this way. But I would ask this: Is it better to gloss over these facts, or to recognize and confront them? These details are not mere numbers on a spreadsheet. They are children.

Let’s ask Rep. Davis if he’s aware of these statistics. 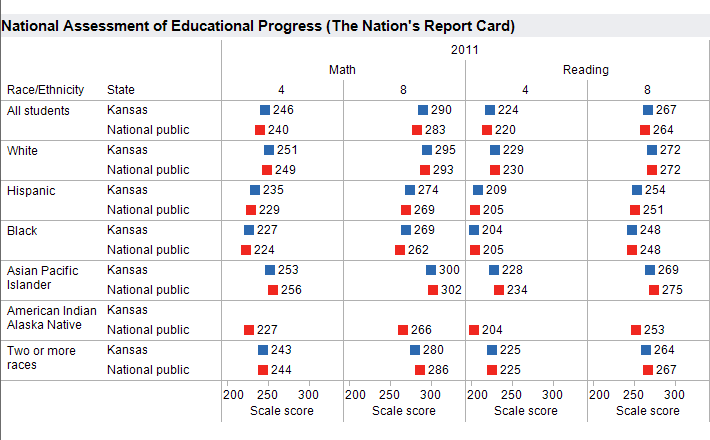