Claims about school spending made by a Kansas Democratic Party leader don’t quite align with facts.

It is commonplace for liberal Kansas politicians and newspaper editorial pages to complain about severely cut spending on schools in Kansas. A recent example is Paul Davis in the Wichita Eagle. 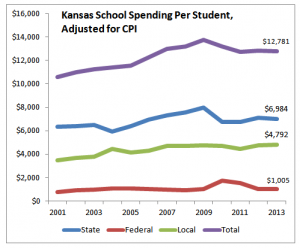 Nearby is a chart of Kansas school spending (click it for a larger version). It’s adjusted for inflation. Spending is not as high as it was at its peak, but Davis’ claim of students who “have experienced severe budget cuts” don’t match the facts.

Now, it’s possible that Davis may want readers to consider only a portion of school spending, that being base state aid per pupil. It’s the starting point for the Kansas school finance formula, and therefore an important number.

Base state aid per pupil has fallen in recent years. Because of this, public school spending advocates claim that spending has been cut. But that’s not the case. As shown in the nearby chart, there has been a steady increase in measures of school spending when compared to base state aid.

What’s important to realize is that the nature of Kansas school funding has changed in a way that makes base state aid per pupil less important as an indicator of school spending.

The Kansas Supreme Court had something to say about this in its recent Gannon opinion that sent part of the case back to the lower court with instructions: All funding sources are to be considered: “In the panel’s assessment, funds from all available resources, including grants and federal assistance, should be considered.”

I wonder: Those who call for a return to the level of base state aid of 20 years ago (adjusted for inflation, of course): Would they also accept returning to the same ratios of total spending to base state aid?