In Wichita, a public hearing with missing information

The Wichita City Council is holding a public hearing, but citizens don’t have information that would be useful if they’re interested in conducting oversight. 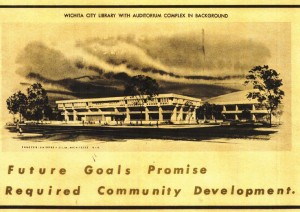 There’s another difference. In the item to be considered today, there is a grant of $20,000. This is a gift of cash with few strings attached, except that it be spent on something the owner must spend anyway.

In 2009, the Facade Improvement Program was revised to require that private funding for overall project costs be at least equal to public funding and that applicants show a financial need for public assistance in order to complete the project, based on the owner’s ability to finance the project and assuming a market-based return on investment.

Later on, the same document states

The Office of Urban Development has reviewed the economic (“gap”) analysis of the project and determined a financial need for incentives based on the current market.

In other words, without the benefit of the facade improvement loan and grant, the project would not be economically feasible. Which, to me, seems curious. A $20,000 grant for a $2,500,000

project is 0.8 percent of the project. The lower interest rate for the $156,034 being financed under the program provides some small additional benefit. These values are small compared to the scope of the project. It is not possible to forecast future revenues and expenses with the precision necessary to conclude that the facade improvement program boosts this project over the bar of economic feasibility, whatever that is.

We’ll probably not know what that bar is. I asked for the “gap” analysis. It doesn’t appear that it will be available before today’s meeting. I asked for it Thursday evening, and the city’s public information officer has followed up with me to see if I received the document, but I do not have it. The public doesn’t have it. I doubt if city council members have it.

The item today is a public hearing. The law requires it to be held so that the council can receive input from the public. Whether the public is informed — that’s a different matter.

Who reads the agenda

The agenda packet for the previous week contained a mistake. It was a mistake that is easy to make and not of any serious consequence. The wrong pages appeared for an item, and the correct pages were not in the packet. When I inquired about this late Monday afternoon — not long before the Tuesday meeting — the city’s public information office thanked me for bringing this to the city’s attention. A correction was promptly published.

Which leads me to wonder: Had anyone else read the agenda with sufficient attention to notice that mistake?