Wichita has set ambitious goals in job growth, but it doesn’t seem that the Visioneering program has produced results. But apparently Wichita government officials are satisfied.

In 2004 Wichita leaders created Visioneering Wichita. The self-described goals of Visioneering are “To provide citizen input in developing our future, to facilitate communications so reality and perceptions are aligned, and to create a strategic plan that ensures a quality of life and encourages our young people to live, learn, work and play in our regional community.”

One of the benchmarks of Visioneering is “Exceed the highest of the annual percentage job growth rate of the U.S., Omaha, Tulsa, Kansas City and Oklahoma City.”

In May, Suzie Ahlstrand of the Wichita Chamber of Commerce presented Wichita City Council members with the benchmark documents, but didn’t elaborate on these in her presentation.

I can understand her reluctance to focus on these numbers. They’re not good.

We don’t know what the Wichita economy would look like in the absence of Visioneering. There’s no way to rewind and watch what would have happened had Visioneering not been created.

What we do know, however, is that the Wichita-area economy is not performing well. Consider job growth, since that is the first of Visioneering’s benchmarks. The chart Visioneering presented to council members is available here. It’s a difficult chart to read, and doesn’t lend to ready comparison of how Wichita is doing compared to our peers.

Following are charts I created from similar data. These charts are different from Visioneering’s in that they show the cumulative change in job growth from a starting point. My data goes back to 2001, and since the visualization is interactive, you may adjust the range of years.

Here is a static chart of job growth, considering all jobs. (Click for a larger version.) 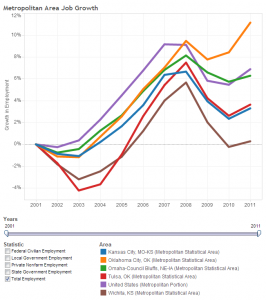 Here is a static chart of job growth, this time considering only government jobs. (Click for a larger version.) 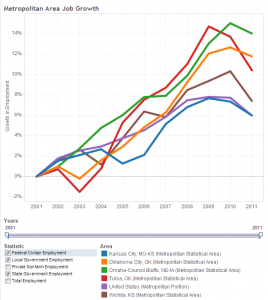 In the light of this, consider the reaction of Wichita Mayor Carl Brewer, as presented in the official minutes: “Mayor Brewer stated this is one of the smartest moves that the City of Wichita has done because it was the primary catalyst that pulled the public and the private together and laid out a vision for our City.”

We need to ask, however, these questions: First, were the mayor and council members aware of these job creation numbers? Second, if they were aware, are they satisfied with this performance?

Explore the data yourself by using the visualization below, or click here to open it in a new window, which may work better for some people. Use Ctrl+Click to highlight metropolitan areas for comparison. Data is from Bureau of Economic Analysis by way of U.S. Department of Labor. Visualization created by myself using Tableau Public.