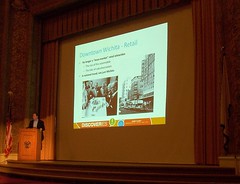 On January 13, 2010, planning firm Goody Clancy presented some findings to a Wichita audience at the Scottish Rite Temple.

Last Wednesday Boston planning firm Goody Clancy presented some preliminary findings regarding the planning process for the revitalization of downtown Wichita. While the presentation contained some material specific to Wichita, those looking for a preview of how the planning process will deliver its promised benefits were likely to be unsatisfied.

As always when talking about downtown, there was talk about how a thriving downtown is necessary for a healthy Wichita and region. One presenter said “If you have a healthy downtown, you will have a healthy region. If the downtown starts to fail, the region will start to fail.” Believers of this mantra, however, are not able to supply evidence as to the truth of this.

A theme repeated over and over is that downtown development will succeed as downtown becomes more walkable.

David Dixon, the Goody Clancy principal for this project, told how that in the future, Wichitans will be able to “enjoy the kind of social and cultural richness” that is found only at the core. “Have dinner someplace, pass a cool shop, go to a great national music act at the arena, and then go to a bar, and if we’re lucky, stumble home.”

Dixon said that this planning effort is grounded in data and hard analysis. As an example, Dixon promoted Walk Score as a measure of the value we place in downtown. Walk score, according to its website, “calculates the walkability of an address based on the distance from your house to nearby amenities. Walk Score measures how easy it is to live a car-lite lifestyle — not how pretty the area is for walking.”

I’ve found that the walk scores are not credible measures. The score for 525 E. Douglas, the block the Eaton Hotel is in and mentioned by Dixon as a walkable area, scored 91, which means it is a “walker’s paradise.” Examination of the results, however, leads us to have little confidence in this measure.

For a nearby library, it lists Robert F. Walters Digital Library, which is a specialized geological library costing $1,500 per year to use — over the internet.

For a drug store, it lists Rx Doctor’s Choice, which is a specialty store selling oral chelation treatments. It’s nothing at all like a general-purpose drug store. One of those is nowhere nearby.

Some claims and evidence just don’t make sense. A slide titled “The Sedgwick County economy is projected to grow” contained a graph that, while showing a projected increase in employment for the next few years, becomes flat for many years. This slide was used twice in different presentations.

Some of the most specific information about Wichita was contained in the residential and hotel market presentations. Regarding the hotel market — the presentation is available at the WDDC website — the preliminary conclusions are: there is market to support additional hotel rooms downtown, limited service hotel niche is a near term opportunity, cluster hotels in mixed-use, pedestrian-oriented environments, and to maximize leverage, locate hotels near convention center.

The residential market findings are not available online at this time, but the main finding is that downtown Wichita should be able to support 1,000 new residential units over the next five years, about 200 new units per year. The mix, according to the presenter, should be 134 rentals, 48 condominiums, and 18 live-work spaces. Rental prices would range from $400 to $2,100, while purchase prices would range from $150,000 to $400,000.

Some speakers from Goody Clancy revealed a condescending attitude towards those who hold values different from this group of planners. One presenter said “Outside of Manhattan and Chicago, the traditional family household generally looks for a single family detached house with yard, where they think their kids might play, and they never do.”

The presenter on retail topics had been in Wichita only once for a period of four days — “not a lot” by his own admission. His presentation was mostly generic and could have been presented at any city.

In his closing remarks, Dixon noted that there was no disagreement among the presenters and panelists, except in one case over parking, and that really wasn’t a disagreement after all. He also said that the presentation tonight was not just an infomercial for downtown, but a presentation of data about our markets.

In the short time devoted to questions from the audience — about ten minutes from a two hour meeting — several questioners wasted much time delivering their own personal stories instead of asking questions.

One question asked about cooperation between the downtown planning effort and a committee working on homeless issues. The answer by Dixon was noncommittal.

It’s starting to be revealed that the fifteen to one returns will be realized after “critical mass” is achieved. It appears that public investment will be at the front, with private investment blossoming later — according to plans. As there is no definition of what constitutes critical mass, any criticism can always be deflected by claiming that that mass has not yet been achieved.

Dixon is correct in that the use of eminent domain is more restricted than in the past. But in Kansas, the threat of its use is still available, and may be as effective as its actual use.

After the event I received feedback from two residents of Wichita who are skeptical of downtown planning. One said “I thought the answers to questions they gave were very generic and broad. Answers that could have applied to any city or town anywhere.”

Another made an observation about the composition of the discussion panel members: “Something else I observed was that the panel existed of mostly those that seem to be already on the ‘in’ when it comes to elected officials in the city. Now I recognize that there are two ways of looking at this situation. People can be insiders either because they are active in developing downtown and are the ‘go to’ guys, or they are developing downtown because they are insiders and know where the money is to get the projects done to line their pockets. I really do not care which is the case with the people that are on the panel, but to me I just wish that there was a larger pool of people that the WDDC and Goody Clancy chose from to sit on the panels.”