Instead of calling for the expansion of Amtrak — perhaps the worst of all federal agencies — the City of Wichita should do taxpayers a favor and call for an end to government subsidy of Amtrak everywhere. 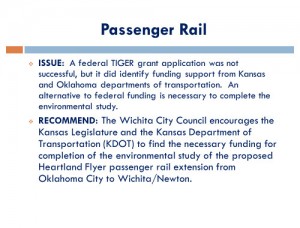 Amtrak is very expensive. In most parts of the country it relies on massive taxpayer subsidy. For example, for the line from Fort Worth to Oklahoma City — the line proposed for extension to Wichita – taxpayers pay a subsidy of $26.76 per passenger for the trip. And that’s a short trip.

Being expensive, Amtrak is usually pitched as an economic development driver. Yes, taxpayers pay for passengers to ride, but once in your town they spend money there! Never mind that so few people travel on trains (outside the Northeast Corridor) that they are barely noticed. In 2012 intercity Amtrak accounted for 6,804 million passenger-miles of travel. Commercial air racked up 580,501 million passenger-miles, or 85 times as many.

For him and the local business leaders he’s spoken with, it’s all about productive hours. Meitzner says the people who are interested in regional train travel for business are often people who are currently driving to their destinations instead. They’re equipped with smartphones, tablet computers and other technologies, but they can’t use them much, or at all, while they’re driving. Sitting on trains, businesspeople could get work done, he says. He suggests the rise of new mobile technology is one reason passenger rail travel is on the rise. ( Meitzner says there’s a business case for passenger rail in Wichita, Wichita Business Journal, July 18, 2012)

Unfortunately for Meitzner’s business case, at about this time the New York Times published a piece detailing the extreme frustration Amtrak riders had with on-train wi-fi service, reporting “For rail travelers of the Northeast Corridor, the promise of Wi-Fi has become an infuriating tease.” Contemporary new stories report that Amtrak is still planning to upgrade its wi-fi systems.

Considering the speed at which government works, by the time a passenger rail line could be established between Wichita and Oklahoma City, it’s quite likely that driverless cars will be a reality. (Remember, we’ve been trying to raise money just for an environmental impact study for many years.) Then, workers can be in their car, use their computers for business productivity, and travel directly to their destination instead of to a train station. Plus, they will be able to do this on their own schedule, not Amtrak’s schedule. That is invaluable, as only one train each day is contemplated.

Furthermore, if there really is a business case for travel between Wichita and Oklahoma City, I imagine that some of the entrepreneurs who have built a new industry around inter-city bus travel might establish service. These new companies use buses with wi-fi, first class accommodations, and other amenities. Buses are much lower cost than rail, are more flexible, and most importantly, are operated by private sector entrepreneurs rather than government.

I understand that leaders like Pete Meitzner and others in city hall see federal money being spent elsewhere, and they want that money also spent here. It doesn’t really matter to them whether the spending is worthwhile, they just want it spent here. This greed for federal tax dollars contributes to the cycle of rising spending. We end up buying and building a lot of stuff that doesn’t really work except for lining the pockets of special interest groups. And, in the case of Meitzner’s pet project, we do this with borrowed money.

We expect this behavior from the progressive members of the council. But conservatives are supposed to stand for something else.

Those who call for an end to subsidy for one industry are often asked why they don’t oppose subsidy for all industry. It’s a fair question, although it distracts from the main issue, which is why it is raised. So, let’s end subsidies for all forms of transportation. Let’s try to match relevant user fees such as motor fuel taxes as closely as possible with the compatible expenditures.

The scope of Amtrak subsidy

In 2010 I reported that Subsidyscope, an initiative of the Pew Charitable Trusts, published a study about the taxpayer subsidy flowing into Amtrak. For the Heartland Flyer route, which runs from Fort Worth to Oklahoma, and is proposed by taxpayer-funded rail supporters to extend into Kansas through Wichita and Kansas City, we find these statistics about the finances of this operation:

Amtrak reports a profit/loss per passenger mile on this route of $-.02, meaning that each passenger, per mile traveled, resulted in a loss of two cents. Taxpayers pay for that.

But this number, as bad as it is, is not correct. Subsidyscope calculated a different number. This number, unlike the numbers Amrak publishes, includes depreciation, ancillary businesses and overhead costs — the types of costs that private sector businesses bear and report. When these costs are included, the Heartland Flyer route results in a loss of 13 cents per passenger mile, or a loss of $26.76 per passenger for the trip from Fort Worth to Oklahoma City.

Subsidy to Amtrak compared to other forms of transporation

From Randal O’Toole Stopping the Runaway Train: The Case for Privatizing Amtrak:

According to the U.S. Bureau of Transportation Statistics, after adjusting for inflation to 2011 dollars, subsidies to domestic air travel averaged about $14 billion a year between 1995 and 2007. Considering that the airlines carried an average of more than 500 billion passenger miles a year during those years, average subsidies work out to about 2.8 cents per passenger mile (see Figure 2).

Using Bureau of Transportation Statistics’ numbers, highway subsidies over the same time period averaged about $48 billion a year. Highways carried about 4.1 trillion passenger miles per year, for an average subsidy of 1.1 cents per passenger mile. While 95 percent of the airline subsidies came from the federal government, all of the highway subsidies came from state and local governments. 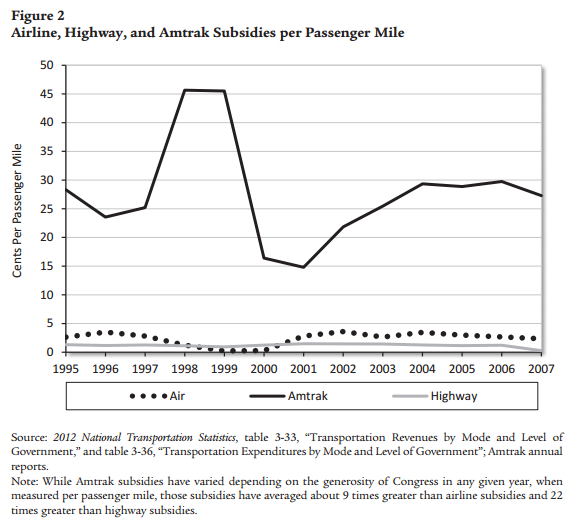 From Amtrak And The Progressive Sleight Of Hand, Competitive Enterprise Institute:

The deficit in what Amtrak collects in revenue and what it spends every year cannot even be taken at face value. Unlike most firms, Amtrak does not count maintenance as an operating cost and instead considers it a capital cost. This allows it to treat routine maintenance like long-term investments in new rail and carrier capacity, pushing these costs off its balance sheet.