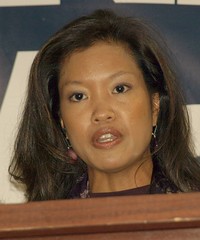 At a fundraising event for Kansas Secretary of State candidate Kris Kobach, conservative author, journalist, and columnist Michelle Malkin delivered a message that appealed to conservatives, although not necessarily the Republican establishment. Her most recent book is Culture of Corruption: Obama and His Team of Tax Cheats, Crooks, and Cronies.

On the national level, Malkin said that there’s a constant theme from the left: Don’t tell the truth about Obama, you’re a hater, you’re a racist, you’re divisive, you’re an extremist. This narrative is designed to keep conservatives quiet. But ordinary American people are pushing back, she said, without the sponsorship of national Republicans in Washington or any top-down group.

This has the Obama administration and the “top-down Astroturfers on the left” in a tizzy. It’s not the way that ACORN and SEIU (Service Employees International Union) have organized its foot soldiers, she said. It’s why there’s been such a vicious and violent reaction from people like Obama Senior Advisor David Axelrod and ACORN chief Bertha Lewis.

She said she embraces the epithets the left throws at her: “I am the angry mob,” she said to applause from the audience.

Malkin said that within the first month of the Obama administration, important campaign pledges of transparency, openness, ethics, and lobbyist bans were broken. Now there is widespread buyer’s remorse.

Malkin quoted Bess Myerson: “The accomplice to the crime of corruption is frequently our own indifference.” The mainstream media is not only indifferent to the corruption of the Obama campaign, but “an active participant in whitewashing that culture of corruption out of all coverage of this man … not just of Barack Obama, but Michelle Obama as well.” 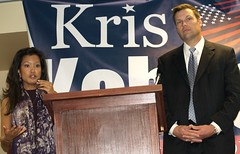 “Sunlight is the best disinfectant,” she said, naming her book, Fox News, conservative talk radio, and alternative media on the Internet as examples of media that are getting out the message.

Holding up a copy of the Constitution, she said “by the way, this is my teleprompter.”

She said the partisan goal of ACORN and its satellite organizations is to elect a Democratic majority and keep it there. Referring to internal scandals in ACORN, the New York Times kept the news quiet in the weeks before the 2008 election because it was a “game-changer.” “They weren’t going to rig the game against Barack Obama.”

Besides an idealogical investment in Obama, there is a financial investment too, as the Times admitted that it sold over a million dollars of “Obama swag” on its website — a conflict of interest, Malkin said.

These organizations have tried to stifle the political expression of conservatives. SEIU president Andy Stern said “We will use the power of persuasion, but when that doesn’t work, we will use the persuasion of power.” When the leftist status quo is faced with change, they respond with violence, as exemplified by the SEIU.

Malkin said that while the Obama administration is trying to control mainstream news media through a czar and a revival of the fairness doctrine, she worries more about what they’re trying to do to ordinary citizens.

“We need to educate, agitate, and organize,” she said. Those in the Republican establishment who advocate toning down the message are unwise. She said we need to fight the capitulationist forces in Washington, as not only are there “Republicans in name only,” there are “conservatives in name only.”

Malkin said that the best place for activists to start is right in their own back yards.

Answering a question about Newt Gingrich and his endorsement of a liberal Republican congressional candidate, Malkin said that Gingrich made an obviously bad decision. He’s made other bad decisions lately too, she said, appearing with Speaker of the House Nancy Pelosi in an ad sponsored by Al Gore that argues for global warming hysteria, and also campaigning with Al Sharpton on education issues.

Another question asked about the viability of a third party in America. Malkin revealed that she voted for the Libertarian presidential candidate Harry Browne in 1996. Kobach added that given the way our electoral system is structured, it is very difficult to displace a party. The Republicans replacing the Whigs is the last such example.

Speaking about the tea party protests, Malkin said that from the start it was never only an anti-Obama phenomenon, despite all the mainstream media spin.

Asked what George Soros is really after, Malkin answered “The destruction of our pillars of capitalism and individual liberty and truly deliberative democracy.”