Looking at Kansas school test scores as compared to the nation.

NAEP is useful because the test is created and administered independently of the states: “Since NAEP assessments are administered uniformly using the same sets of test booklets across the nation, NAEP results serve as a common metric for all states and selected urban districts.”(2)ibid. This is important because studies have shown that states vary widely in the rigor of the tests they create themselves: “The key finding is that the variation among state achievement standards continues to be wide.” (3)National Center for Education Statistics. About the NAEP State Mapping Analyses. Available at nces.ed.gov/nationsreportcard/studies/statemapping/about.aspx.

The NAEP tests are administered at several grade levels and for a variety of subjects, but the primary focus is on math and reading, at grades four and eight. I’ve gathered test scores from NCES several test years, for these two subjects and two grade levels, with the results available by race/ethnicity in one visualization, and by lunch eligibility in another. Eligibility for the school lunch program is used as a proxy for household income, with “eligible” meaning the student is from a low-income household.

I gathered the data using the NAEP Data Explorer available at NCES (4)Available at https://www.nationsreportcard.gov/ndecore/landing.. The data includes the scale score for each state, grade, and subject, along with the percentage of students scoring “Below Basic,” “At or above basic,” “At or above proficient,” and “At Advanced.” The interactive visualizations I prepared are available here.

The test is given to a sample of students in the spring of odd-numbered years, with results reported usually in October. Because of the pandemic, the 2021 NAEP is postponed one year.(5)Due to COVID Pandemic, NCES to delay National Assessment of Education Progress (NAEP) assessment. https://nces.ed.gov/whatsnew/commissioner/remarks2020/11_25_2020.asp. The data presented here is for the 2019 test.

The Kansas State Department of Education has a page of information here.

In its reporting of the 2019 NAEP for Kansas, Kansas Policy Institute wrote, “The U.S. Department of Education released the 2019 scores for the National Assessment of Education Progress (NAEP), and the results are not good for Kansas students. Not only did composite scores drop considerably from 2017, Kansas students are now performing worse than in 2003. Only one in three Kansas 8th graders is proficient in math or reading. The same is true for 4th graders in reading. Fourth graders in math perform only slightly better, with 40% testing proficient.” On the report to the state board of education” “At the recent November board meeting, the Commissioner of Education spent such little time discussing the fact that state assessment scores were flat and NAEP scores were lower, if you had sneezed you would have missed it. Instead of admitting that the needle hasn’t moved on the performance of low achieving students – despite the addition of hundreds of millions of dollars that were to be directed toward helping those students’ achievement — he informed the board how good the top-performing students are doing.”

Sharon Hartin Iorio of Wichita State University College of Education wrote, “Kansas data reveal weakening performance overall and lower rates at the middle level than the elementary. The percentage of Kansas students’ scoring at proficient or advanced levels were smaller in math (33%), reading (32%) and science (34%) at Grade 8 compared to the Grade 4 level (math 40%, reading 34%, science 37%).” She also reported, “[Kansas Association of School Boards] points out that 10 years ago, Kansas was one of the highest performing states, but currently ranks about the same as the national average.” KASB, she wrote, blamed cuts to schools in the past for the drop in scores but: “KASB predicts NAEP scores to rise as court-ordered funding allows schools to add nurses, counselors and other personnel as well as adding and retaining highly qualified teachers.”

In its reporting of Kansas scores, NCES provided the following results. (Since NAEP tests a sample of students, the concept of statistical significance applies. That is, small differences in scores may not represent an actual difference in the population. The authors quoted above do not consider these distinctions.) I’ve summarized NCES findings for Kansas NAEP for 2019, with significant findings italicized:

Reading, grade 8
Not significantly different from nation.
Lower from 2017.
Lower from 1998.

In these examples from my interactive visualization, we can compare Kansas to the nation.

The first chart shows math and reading for grade 4, grouped by race/ethnicity. The first column reports the average scale score. Then, a column for the percent scoring “below Basic,” which is a poor result. Then three columns: “At or above Basic,” “At or above Proficient,” and “At Advanced.”

For example, for grade 4 reading, we can see that when considering all students, the percent proficient or better is the same for Kansas and the nation. But for each of the subgroups Black, White, and Hispanic, Kansas ranks lower, and sometimes by significant margins. There is a similar pattern for grade 4 reading. 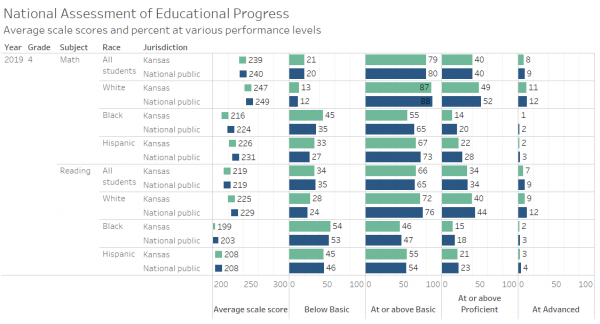 Following is the chart for grade 8 math and reading. 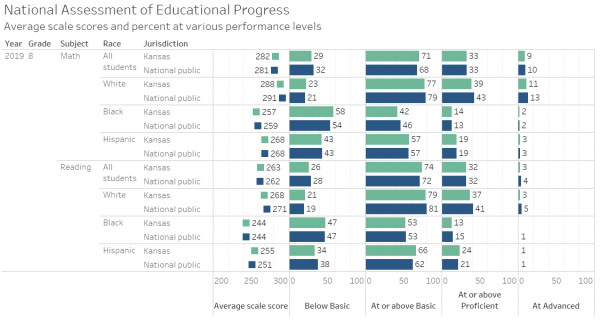 NCES uses eligibility for free or reduced lunch as a proxy for household income. “Eligible” means low income, in this context. In the following table for grade 4 reading and math, the Kansas and national scores are nearly the same, except for the “Not available” category. 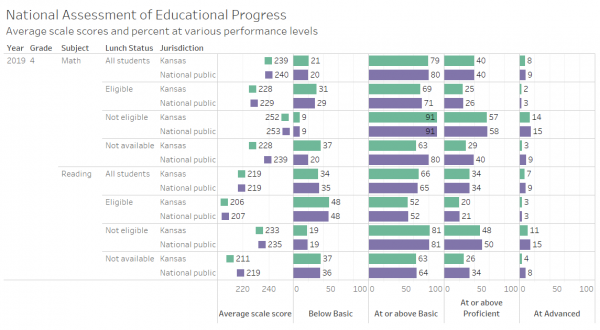 Following, the chart for grade 8 math and reading by lunch status. 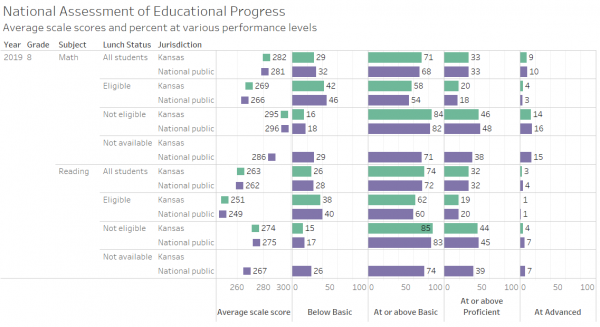