College costs in Kansas: Rising by more than a tad

Have college costs exceeded the rate of inflation by just a “tad,” as claimed by a Kansas college professor?

Washburn University Political Science Professor Mark Peterson wrote in a recent op-ed that “The actual cost of obtaining postsecondary education has, like everything else, continued to rise — mostly at the rate of inflation plus a tad.”(Mark Peterson: State sends wrong higher-ed message, Wichita Eagle, Sunday, January 26, 2014.)

The College Board keeps track of college costs and publishes its findings at Trends in College Pricing. Of particular interest is a table titled “Figure 5. Inflation-Adjusted Published Tuition and Fees Relative to 1983-84, 1983-84 to 2013-14 (1983-84 = 100).” This table assigns the cost of tuition and fees for the 1983-1984 school year to be 100, and tracks changes from that level. These numbers are adjusted for inflation.

The interpretation of these numbers is this: For private non-profit four-year colleges, the cost of tuition and fees is 2.53 times the level in 1983-1984. Or, since these values are inflation-adjusted, the cost rose 2.53 times as fast as inflation.

Turning our attention to Kansas: Kansas Policy Institute has examined college costs. Its findings can be found in A Historical Perspective of State Aid, Tuition and Spending for State Universities in Kansas. Nearby is a table from that report. Note that over the ten-year period covered, inflation rose by 25.3 percent. For the six Regents Institutions in Kansas, all except for Fort Hays State had costs increasing by over 100 percent. That’s over four times the ate of inflation. University of Kansas costs rose by 193.6 percent, or 7.6 times the rate of inflation. 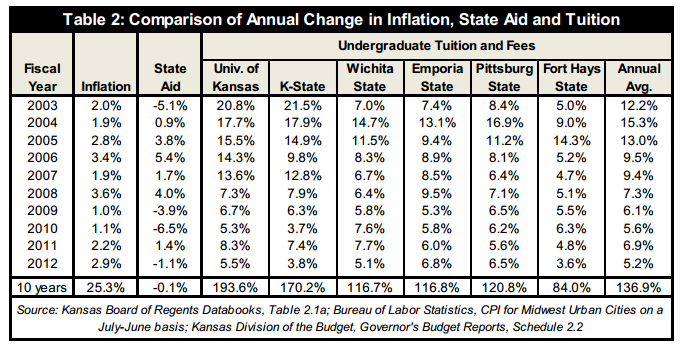 Remember, Professor Peterson wrote that college costs had risen “mostly at the rate of inflation plus a tad.” His language leaves him a little wiggle room, as “mostly” and “tad” don’t have precise meanings. But evidently the product of the two is a pretty large number.

Peterson also wrote regarding public postsecondary education that “its price continues to climb and the Kansas general fund contributes less.” Note that the KPI table shows that state aid has declined by one-tenth of one percent over ten years. That, I think, qualifies as a “tad.”