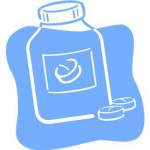 Scheduled to take effect on January 1, the employer mandate portion of the Affordable Care Act (ObamaCare) has been delayed for one year.

Curiously, this announcement was made on an obscure Treasury Department blog, along with articles titled “Meeting, and Exceeding, Our Small Business Procurement Goals in FY 2012” and “In Case You Missed It: Top Executives Say U.S. Is #1 for Foreign Direct Investment.”

The employer mandate requires those who employ more than 50 full time-equivalent employees to provide insurance or pay a penalty. Cato Institute’s Michael D. Tanner notes the general problem, and a specific problem based on the decision to delay the employer mandate:

In postponing the implementation of the Affordable Care Act’s employer mandate until after the 2014 mid-term elections, the Obama administration has tacitly admitted what critics of the law have long contended: that Obamacare is unworkable and would be a significant burden for American business and the economy at large. Stay tuned for further dominoes falling.

Actually, the Administration’s decision to postpone the employer mandate may make a bad situation worse. Because the individual mandate remains in place, workers may now face a situation where they must purchase their own insurance or pay a penalty because their employers don’t provide coverage. In effect, the administration’s decision shifts the cost from employers to workers. This hardly seems fair, and may force the administration to rethink the individual mandate as well. (And So the Obamacare Train Wreck Begins … )

Will the implementation of other parts of ObamaCare be delayed? I think it seems likely. But: Section 1513 AVC states, regarding the employer mandate: “The amendments made by this section shall apply to months beginning after December 31, 2013.” So does the administration have the legal authority to make changes like this? 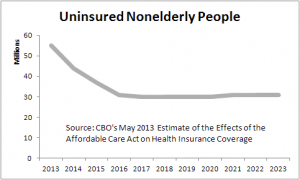 Also: For all the wrenching debate and changes, there will still be many uninsured people. Here’s a chart based on the Congressional Budget Office May 2013 estimate of the effects of the Affordable Care Act on health insurance coverage.

This is just the start of discovery of pathologies built into ObamaCare. Here’s Avik Roy explaining an incentive contained within the employer mandate:

The strong penalty vs. the weak penalty

The employer mandate actually consists of two different penalties, based on two different categories of employer behavior. These originate from Section 4980H of the Affordable Care Act. Subsection (a) requires steep penalties for employers who offer no coverage at all. Subection (b) requires modest penalties for employers who offer “minimum essential coverage under an eligible employer-sponsored plan.” This difference — between the strong penalty in 4980H(a) and the weak penalty in 4980H(b) — is crucial to understanding how things will play out in the future.

Under the strong penalty, in which an employer “fails to offer to its full-time employees…the opportunity to enroll in minimum essential coverage,” and “at least one full-time employee” enrolls in an exchange, the employer has to pay a fine of $2,000 times the total number of full-time-equivalent employees at the firm, minus 30. (The employer mandate only applies to firms with 50 or more full-time-equivalent workers.) So if you employ 50 workers, that’s a fine of 20 * $2,000 = $40,000. And the fine isn’t tax-deductible, adding to the pain.

Under the weak penalty, in which an employer does offer “the opportunity to enroll in minimum essential coverage,” but that coverage doesn’t meet Obamacare’s requirements for affordability or actuarial value, and at least one worker enrolls on an exchange instead, the fine is $3,000 times the number of workers who enroll on the exchanges. So, if you employ 50 workers, and three of them get coverage on the exchange instead, the fine is a much lower 3 * $3,000, or $9,000. (Technically, in subsection (b), employers pay the lesser of the weak penalty or the strong penalty, but this in most cases should be the weak penalty.)

So: Employers avoid the strong penalty and gain eligibility for the weak penalty by offering “minimum essential coverage.”

Roy goes on to explain that “minimum essential coverage” means coverage my any insurance plan that can legally be sod in a state, including plans that provide limited coverage or services. Roy writes that companies may offer these bare-bones plans to their employees and escape the penalties.

This behavior, which federal officials have confirmed is allowed, evidently wasn’t considered by officials, writes Roy: “Nonetheless, Obamacare’s designers expressed surprise that employers would do such a thing. ‘Our expectation was that employers would offer high quality insurance,’ said Robert Kocher, a former Obama health care adviser. It wouldn’t be the first time that the law’s authors didn’t recognize how economic incentives actually work.”

Economic incentives are what makes the world work. They’re based on human behavior, and that isn’t easily changed, even to suit Barack Obama’s desires.