Opponents of school choice programs argue the programs harm traditional public schools, both financially and in their ability to serve their remaining students. Evidence does not support this position.

A rebuttal is that since a public school has shed the responsibility for schooling the student, its costs should fall correspondingly. This would be true if all the costs of a public school are variable. Some costs are fixed, however, meaning they can’t be adjusted quickly — in the short run, that is. An example is the cost to maintain a classroom. If a school has one less student than the year before, it still requires the same support for utilities. One or several fewer students doesn’t mean that fewer teachers are needed. 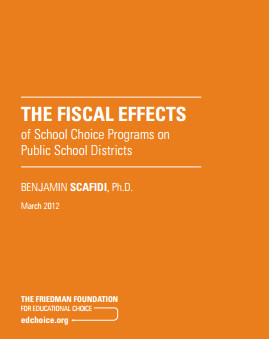 The question, then, is what portion of a school’s costs are variable, meaning costs that schools can adjust quickly, and what portion are fixed, meaning they can’t be adjusted quickly? Benjamin Scafidi, professor of economics at Kennesaw State University, has examined schools looking for the answer to this question. His paper The Fiscal Effects of School Choice Programs on Public School Districts, published by EdChoice (formerly The Friedman Foundation for Educational Choice), holds answers to these questions.

The first question is this: What is the relation of school choice programs to school districts’ variable costs? Scafidi has endeavored to determine the breakdown between variable and fixed costs in each state. In Kansas, for the 2008 – 2009 school year, total spending per student was $11,441. Of that, Scafidi estimates $3,749, or 32.8 percent, were fixed costs. Variable costs were $7,692, or 67.2 percent. Since then spending has risen, but there’s no reason to think the allocation of costs between fixed and variable has changed materially. For the school year ending in 2015 total spending per student was $13,1241. That implies fixed costs per student of $4,305 and variable costs per student of $8,819.

Now, how much money would a public school lose if a student chose to attend a school other than the traditional public schools? For Kansas this question is complicated by recent changes in the way public schools are funded. Prior to the school year ending in 2016, Kansas used a school funding formula that started with a figure called “base state aid per pupil.” For 2015 the value was $3,852, and that is the starting point for calculating state spending per student.

In a recent presentation on this topic, Scafidi said: “Any school choice program where about $8,000 per student or less, on average, follows the child to the school of his or her choice, improves the fiscal situation of the public school district, on average, and students who remain in public schools have more resources available for their education.” Considering only base state aid per pupil, a typical Kansas school district, which has variable costs of $8,819 per student, has its fiscal situation improved when it loses a student and the accompanying $3,852 in state funding.

Many Kansas students, however, trigger much more funding due to weightings that compensate for the purported higher costs of some situations. The largest weighting in Kansas, based magnitude, is the “at-risk” weighting. It adds 45.6 percent to base state aid. So if a Kansas public school loses such a student and weighting, it loses $5,608 in funding. That is far less than its variable costs of $8,819. State funding for Kansas schools in the school year ending in 2015 was $8,5672 per student, still less than school districts’ variable costs.

I asked Scafidi what is the dividing line between variable and fixed costs? The answer is that within two or three years, schools should be able to adjust their fixed costs to be in line with their needs. This is in line with the economic and accounting reality that says in the long run, all costs are variable.

Can school districts adjust their costs quickly in response to changing enrollments? This may be a problem for the very smallest districts, those with just one or two teachers per grade, Scadifi concedes. In his paper, Scafidi illustrates two examples of districts in Georgia with just over 1,000 students making adjustments. In Kansas, there are 286 school districts. Of these, 207 have enrollment of less than 1,000 students, but only 20 percent if the state’s students are in these small districts.

School districts often dispute the contention that they are able to reduce their variable costs rapidly in response to enrollment changes. Scafidi notes that if school districts say they cannot reduce costs when they lose students, the implication is that all of their costs are fixed. If that is true, then schools should not receive additional funding when enrollment rises. If all their costs truly are fixed, the total cost of running a school district does not change with enrollment — either up or down.

Kansas is in the process of formulating a new school financing method. For the school years ending in 2016 and 2017 the state has used a block grant method, whereby state funding to school districts was frozen at the 2015 level with some increases programmed into the law. Current law anticipates a new funding formula being passed in the 2017 legislative session and applied to the school year ending in 2018.

One of the most important goals for the new funding method should be transparency and flexibility. The prior school finance formula was criticized as being complex and difficult to understand. For example, in June the Kansas Legislature held a special session in order to increase school funding in response to a decision by the Kansas Supreme Court. But, more than half of the higher funding the Wichita school district received went to property tax reduction, rather than being spent on schools.3 Citizens have trouble understanding how increasing state school funding means a reduction in property tax instead of more teachers or schoolbooks. This illustrates a problem with transparency in the prior funding formula.

We have seen that school choice programs do not harm the finances of local school districts. The second question concerns the quality of education for the students who remain in public schools.

To answer this question, we must recognize the wide variation of teacher efficacy. Some are very good, and some very poor. Further, the difference between good and bad is large. Eric A. Hanushek and others have found that very good teachers routinely produce 1.5 years of gain in achievement during an academic year. Bad teachers produce 0.5 years of gain.4 If a student is unfortunate enough to experience ineffective teachers two or three years in a row, the student may be so far behind as to never catch up.