Teachers union members to be proud of

Critics of public schools usually explain that they’re not faulting individual teachers. Instead, they target their criticism at the teachers union, bureaucratic school administration, or “the system” in general.

So when we observe the actions of teachers, we’re correct to wonder if they’re acting as citizens, or as teachers representing their school districts, or as union members, or in some other role. This issue is important when we take notice of the actions of teachers at a recent meeting of the South-Central Kansas Legislative Delegation in Wichita.

Here’s a message tweeted during that meeting from Judy Loganbill, a Wichita school teacher and until this year, a member of the Kansas House of Representatives:

Loving the schooling the legislators are getting today. #conservativeasskicking #ksleg

This salty language inspired by political conflict: Is that Judy Loganbill citizen, teacher of young children, or union member speaking? 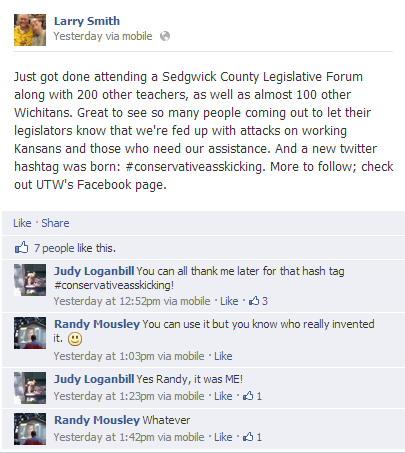 Randy Mousley is president of United Teachers of Wichita, the Wichita teachers union. Parents of Wichita schoolchildren might be interested in knowing which role he’s assuming when taking credit for his invention: Citizen, union leader, teacher, or something else?