Why are Kansas school standards so low? 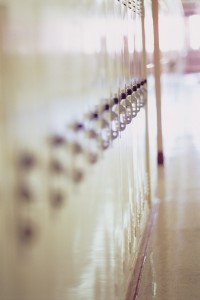 At a time when Kansas was spending more on schools due to an order from the Kansas Supreme Court, the state lowered its already low standards for schools.

This is the conclusion of the National Center for Education Statistics, based on the most recent version of Mapping State Proficiency Standards Onto the NAEP Scales. NCES is the primary federal entity for collecting and analyzing data related to education in the U.S. and other nations, and is located within the U.S. Department of Education and the Institute of Education Sciences.

The mapping project establishes a relationship between the tests each state gives to assess its students and the National Assessment of Education Progress, a test that is the same in all states. As explained earlier this week in Kansas school standards and other states, Kansas standards are relatively low, compared to other states. This video explains. (View below, or click here to view in HD at YouTube.)

For Kansas, here are some key findings. First, NCES asks this question: “How do Kansas’s NAEP scale equivalent scores of reading standards for proficient performance at grades 4 and 8 in 2009 compare with those estimated for 2005 and 2007?”

“Although no substantive changes in the reading assessments from 2007 to 2009 were indicated by the state, the NAEP scale equivalent of both its grade 4 and grade 8 standards decreased.”

Also: “Kansas made substantive changes to its reading grade 8 assessment between 2005 and 2009, and the NAEP scale equivalent of its grade 8 standards decreased.”

In other words, NCES judged that Kansas weakened its standards for reading performance.

A similar question was considered for math: “How do Kansas’s NAEP scale equivalent scores of mathematics standards for proficient performance at grades 4 and 8 in 2009 compare with those estimated for 2005 and 2007?”

Also: “Kansas made substantive changes to its mathematics grade 4 assessment between 2005 and 2009, but the NAEP scale equivalent of its grade 4 standards did not change.”

For mathematics, NCES judges that some standards were weakened, and some did not change.

In other words: In three of four instances, Kansas is claiming positive student achievement that isn’t apparent on national tests.

Kansas is not alone in weakening its standards during this period. It’s also not alone in showing better performance on state tests than on national tests. States were under pressure to show increased scores, and some — Kansas included — weakened their state assessment standards in response.

What’s important to know is that Kansas school leaders are not being honest with Kansans as a whole, and with parents specifically. In the face of these findings from NCES, Kansas Commissioner of Education Diane M. DeBacker wrote this in the pages of The Wichita Eagle: “Kansans are proud of the quality of their public schools, and a steady and continuing increase in student performance over the past decade has given us ample reason for that pride.” (Diane DeBacker : Pride in Kansas public schools is well-placed, March 20, 2012.)

A look at the scores, however, show that national test results don’t match the state-controlled tests that DeBacker touts. She controls these states tests, by the way. See Kansas needs truth about schools.

The same year a number of school district superintendents made a plea for increased funding in Kansas schools, referring to “multiple funding cuts.” (Reverse funding cuts, May 3, 2012 Wichita Eagle.) In this article, the school leaders claimed “Historically, our state has had high-performing schools, which make Kansas a great place to live, raise a family and run a business.”

These claims made by Kansas school leaders are refuted by the statistics that aren’t under the control of these same leaders. Before courts rule on school spending, and before we change Kansas school standards, we need to realize the recent stewardship of Kansas schools under current leadership.

Why are Kansas school standards so low compared to other states?

Why did Kansas reduce its standards at the same time school spending was increasing?

Following are two examples of where Kansas school standards rank compared to other states. Click on them for larger versions. 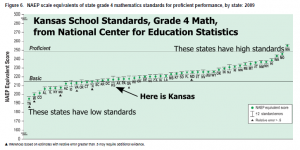