Kansas school standards and other states

Do those who call for more Kansas school spending defend the standards Kansas applies to these schools?

As Kansas attempts to position its economy for growth by reducing taxes, we’re told that Kansas risks letting its public schools decay. Consider the editorial Legislators, Brownback renege on promises to get done with session in the Hutchinson News: “And so Kansas continues down a path to fulfill Brownback’s vision of a no-income-tax state. Meanwhile, we also will accept mediocre public schools and universities and inadequate services to disadvantaged Kansans who at the same time will shoulder more of the tax burden.”

This is typical of the defense of Kansas school spending: Kansas schools have been doing a good job compared to other states, and under difficult circumstances because we don’t spend near enough. We must spend more, we are told by the school spending interests, and soon the Kansas Supreme Court may add its voice.

But before we decide to invest more in our state’s public schools, shouldn’t we learn whether Kansas has been holding its schools to high standards?

When talking about the quality of Kansas schools, the first thing to realize is that Kansas has set low standards for its schools, compared to other states. The nearby illustration (click for larger version) maps state test scores onto the National Assessment of Education Progress, a test that is the same in all states. Fourth grade reading is presented in this illustration. States on the right side of the chart have higher standards than those to their left. Note where Kansas appears: Only seven states appear to its left, meaning that Kansas has very low standards for fourth grade reading.

In other subject areas and other grades, Kansas appears a little further to the right. But in no case does Kansas appear above the midpoint.

Despite these facts, last year Kansas school superintendents claimed in an editorial that “Historically, our state has had high-performing schools, which make Kansas a great place to live, raise a family and run a business.” Most newspaper editorial writers believe that without looking at the actual situation. See Despite superintendents’ claim, Kansas schools have low standards for more on this topic.

It’s often expressed that Kansas ranks well on the National Assessment of Education Progress, a test that is the same in all states. Kansas school administrators take pride in mentioning this.

Consider fourth grading reading, an important benchmark. Kansas ranks 17th among the states, with eight performing significantly better than Kansas, and 21 with no significant difference from Kansas. If you stopped looking at this point, you might conclude, as do most Kansas newspaper editorial writers, that Kansas has good schools.

But consider white students alone. In this case, Kansas ranks 25th among the states, with 11 performing significantly better than Kansas, and 24 not significantly different.

If we look at black students alone, Kansas ranks 26th among the states, with six performing significantly better than Kansas, and 37 not significantly different.

Because different ethnic groups tend to perform at different levels on the NAEP test, and because states have different mixes of ethnic groups, aggregated statistics can hide an important underlying story. In this case, we see that Kansas schools don’t rank as high as naive supporters believe. 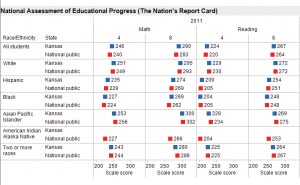