Compared to a broad group of peer metropolitan areas, Wichita performs very poorly. As Wichita embarks upon a new era of economic development, we need to ask who to trust with this important task.

The good news: In a recent op-ed, Wichita Mayor Carl Brewer wrote that the city needs to make a decision regarding “A more aggressive approach to job creation.” (Carl Brewer: Wichita can have a great next year, December 22, 2013 Wichita Eagle)

The bad news: Wichita has performed very poorly in job creation in recent decades, and even if we decide on a more aggressive approach, pretty much the same crew is in charge.

Many in Wichita don’t want to recognize and confront the bad news about the performance of the Wichita-area economy. Last year, when presenting its annual report to local governmental bodies, the leaders of Visioneering Wichita would not present benchmark data to elected officials.

Some, however, have recognized the severity of the problem. In 2008 Harvey Sorensen, who has been chair of Visioneering Wichita, chair of the Wichita Metro Chamber of Commerce, and has held other civic leadership positions, wrote in the pages of the Wichita Eagle: “We are losing ground competitively with our peer communities.” (Community Needs a Common Vision, August 24, 2008 Wichita Eagle) 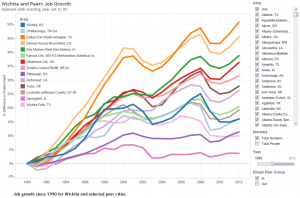 So what is the record of the Wichita metropolitan area regarding job creation, that seeming to be the most popular statistic our leaders cite and promote? I’ve prepared statistics from the Bureau of Labor Statistics, U.S. Department of Labor for Wichita and a broad group of peer cities. I included our Visioneering peer cities, cities that Visioneers traveled to on official visits, and a few others. The result, shown nearby, is not pretty. (Click on charts for larger versions, or click here to use the interactive visualization) 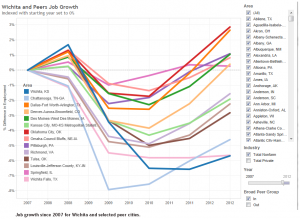 If we look at job creation starting in 1990, Wichita lags behind our Visioneering peers, but not behind all the peer cities that I selected. Wichita does better than Springfield, Illinois, for example. I chose to include that as a peer metropolitan area because that’s the immediate past city that Gary Plummer worked in. He was president of that city’s Chamber of Commerce, and is now president of the Wichita Chamber. Note the position of Springfield: Last place.

In second-to-last place we see Pittsburgh, which I added because Visioneering leaders recently made a visit there.

Then, we come to Wichita.

If we look at job creation since 2007, the year before Sorensen wrote his op-ed, we find Wichita in a common position: Last place in job creation, and by a wide margin except for two cities. One is Wichita Falls, where our present GWEDC president recently worked. The other city that barely out-performs Wichita is Chattanooga, which I included because Visioneering civic leaders recently traveled there to learn from that city.

Over the decades in which Wichita has performed poorly, there have been a few common threads. Brewer has been council member or mayor since 2001. Economic development director Allen Bell has been working for the city since 1992. City Attorney Gary Rebenstorf has served for decades. At Sedgwick County, manager William Buchanan has held that position for more than two decades. On the Sedgwick County Commission, Dave Unruh has been in office since 2003, and Tim Norton since 2001. It is these officials who have presided over the dismal record of Wichita. 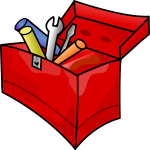 These leaders often complain that Wichita does not have enough “tools in the toolbox” to compete with other cities in economic development. Wichita does, however, have and use incentives. The State of Kansas regularly offers incentives so generous that Kansas business leaders told the governor that they value these incentives more than they would value elimination of the state corporate income tax.

Incentives: We have them. They haven’t worked for us.

It is nearly certain that this year Wichitans will be asked to approve a higher sales tax in order to pay for many things, including the more aggressive approach to job creation that Brewer mentioned. Based on the track record of our elected officials and bureaucrats, we need to do this: Before approving the tax and expenditures, Wichitans need to take a long look at the people who have been in charge, and ask what will be different going forward.