Recent use of the Wichita City Council public agenda has highlighted the need for reform.

At meetings of the Wichita city council, non-council members generally have two opportunities to address the council members. One is as each agenda item is considered. There is (usually) an opportunity to speak only on that topic. If you want to speak about something else, there is also an opportunity near the start of the meeting called the public agenda. 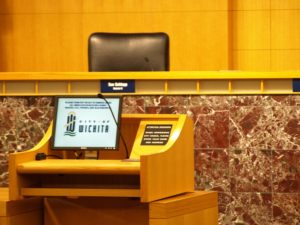 The council has policies regarding the public agenda, particularly the need to sign up before the meeting, and far in advance: “Members of the public desiring to present matters to the council on the public agenda must submit a request in writing to the office of the city manager prior to twelve noon on the Tuesday preceding the council meeting.” 1

The practical problem is this: If the council takes action on Tuesday that inspires someone to address the council on the public agenda, that probably can’t happen at the next council meeting, if the policy is followed as stated. For one thing, the council might not take action until after noon, so the deadline for speaking at the next meeting has passed by then. But more likely and most importantly, many people are not able to watch the council meeting live. Instead, they may view a delayed broadcast on cable television, watch the meeting through the city’s website, or read news reporting. By the time any of these happen, the deadline for the next meeting’s public agenda has passed.

Why is this important? In Kansas cities of the first class, a law is not “officially passed” until it has passed on “second reading.” 2 This is a procedure whereby an ordinance that has passed “first reading” is voted upon again, and if it passes, it then may become law. Often second reading happens at the next council meeting, one week later. (“First reading” is what people see in meetings and is reported in news stories. A proposed ordinance is explained, usually by city staff. Then there may be discussion from the public and among council members, and then a vote.)

So if a person has a problem with an ordinance that passed first reading and wants to speak to the council before the second reading of the ordinance, that probably won’t be possible, for timing reasons explained above.

It is very rare for the second reading of an ordinance to be “pulled” from a consent agenda for discussion and separate vote. It may have happened, and if so, I can’t recall when. So even if you spoke on the public agenda regarding an ordinance at the meeting where that same ordinance appears on second reading, your speech might not mean much unless a council member “pulls” the item from the consent agenda for discussion and possibly, an individual vote.

(You may be wondering: Does second reading ever happen in the fourth Tuesday meetings where there is no public agenda? Yes. It happened on January 23, 2018, for example.)

Would reform of the council’s public agenda make a difference? Do council members listen to and consider the opinions of speakers on the public agenda?