In the economic sphere an act, a habit, an institution, a law produces not only one effect, but a series of effects. Of these effects, the first alone is immediate; it appears simultaneously with its cause; it is seen. The other effects emerge only subsequently; they are not seen; we are fortunate if we foresee them.
— Frederic Bastiat

While the program to reduce airfares in Wichita has probably met that goal, there have been consequences.

In particular, the availability of air travel in Wichita is lower than it has been, and the trend is in the wrong direction. In some aspects the Wichita trend mirrors that of the nation and other airports, and in others Wichita is falling farther behind. 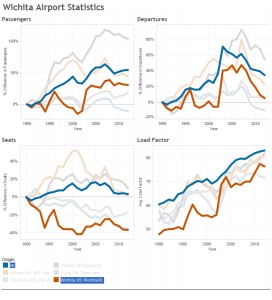 The illustration nearby (click it for a larger version) is a static snapshot of data for the nation as a whole (blue line), Wichita (brown), and a few other airports in cities that Wichita’s Visioneering effort identifies as our peers. For each series, I show the percentage change over time, so that all series operate on the same scale. Data is through the end of 2012.

Of particular concern should be the trend in departures and seats. Both are declining in Wichita, as they are also for the nation. But the gap between Wichita and the nation is widening in recent years.

This trend is an example of unintended consequences of government intervention and regulation. The Affordable Airfares program imposes a rough form of price control on airfares in Wichita. If the program didn’t do that — and it appears it succeeds at this goal — then there would be no point in having the program.

The inevitable effect of price controls is that less is supplied, compared to what would have been supplied. This economic phenomenon is reliable and predictable. While travelers prefer low air fares to high, this is not the only consideration. For those who need to travel on short notice, the availability of flights is very important, and on this measure, Wichita is doing much worse than the nation.

For more about the subsidy programs in use at the Wichita airport, see these articles:

Wichita flight count continues decline. “A program designed to bring low air fares to Wichita appears to meet that goal, but the unintended and inevitable consequences of the program are not being recognized. In particular, the number of flights available at the Wichita airport continues to decline.”

Affordable Airfares audit embarrassing to Wichita. “An audit of Affordable Airfares produced by the Kansas Legislative Division of Post Audit is an embarrassment to City of Wichita elected officials and staff, the Kansas Regional Area Economic Partnership, and the Wichita State University Center for Economic Development and Business Research.”

Mixed message on Southwest subsidies. “Now that Southwest Airlines has announced that it will offer service in Wichita, the question is this: Will Southwest tap the subsidy?”

To help you explore this data, I’ve created an interactive visualization. Click here to open the visualization in a new window. You may add or remove any number of airports. Or, if you’d like to watch a video, click on Wichita Airport statistics: The video.

Data is from Research and Innovative Technology Administration (RITA), which is part of the U.S. Department of Transportation. Visualization created by myself using Tableau Public.