The speck and the logs

When Wichita Mayor Carl Brewer recently shopped for a car, it made the front page of the newspaper, and for a reason that doesn’t seem very newsworthy. Buried in the story, however, is a short passage that holds actual news. Carrie Rengers reports in the Wichita Eagle:

[Brewer] says he knows a lot of dealers in Wichita … but he says he has to be careful about trying to get a good deal while shopping in the city.

“I don’t want to be accused of getting any type of special deals or anything else,” he says. “You have that handful of people that’s always searching for some type of conspiracy.”

It’s good to know that this mayor is concerned about ethical behavior when shopping for a car. But I’m surprised, as this concern for virtue doesn’t match the behavior of the mayor and many members of the Wichita City Council.

Exhibit 1: In August 2011 the Wichita City Council voted to award Key Construction a no-bid contract to build the parking garage that is part of the Ambassador Hotel project, now known as Block One. The no-bid cost of the garage was to be $6 million, according to a letter of intent. Later the city decided to place the contract for competitive bid. Key Construction won the bidding, but for a price $1.3 million less.

The no-bid contract for the garage was just one of many subsidies and grants given to Key Construction and Dave Burk as part of the Ambassador Hotel project. Both of these parties are heavy campaign contributors to nearly all city council members. Brewer and the head of Key Construction are apparently friends, embarking on fishing expeditions.

What citizens need to know is that Brewer and the Wichita City Council were willing to spend an extra $1.3 million of taxpayer money to reward a politically-connected construction firm that makes heavy campaign contributions to council members. Only one council member, Michael O’Donnell, voted against this no-bid contract. At the time, no city bureaucrats expressed concern about this waste of taxpayer money.

Exhibit 2: In July 2012 Brewer participated in a decision to award the large contract for the construction of the new Wichita airport to Key Construction, despite the fact that Key was not the low bidder. The council was tasked to act in a quasi-judicial manner, to make decisions whether discretion was abused or whether laws were improperly applied. Brewer’s judgment was in favor of Key Construction, even though its bid had the same defect as the lower bid. This decision cost taxpayers and airport users an extra $2 million, to the benefit of a major campaign donor and fishing buddy.

Exhibit 3: In a Wichita Eagle story that reported on “city-financed downtown parking garages that spiraled well over budget” we learned this: “The most recent, the 2008 WaterWalk Place garage built by Key Construction, an original partner in the WaterWalk project, came in $1.5 million over budget at almost $8.5 million. That’s the biggest parking garage miss, according to figures from the city’s office of urban development, although the 2004 Old Town Cinema garage built by Key Construction came in almost $1 million over budget at $5.225 million.”

Despite this personal experience, Brewer wrote a letter recommending Key Construction (and only Key), observing “Key is known for their consistent quality construction, budget control and on schedule delivery.”

Exhibit 4: In 2008 the Wichita City Council approved a no- and low-interest loan to movie theater owner Bill Warren and his partners. Reported the Wichita Eagle: “Wichita taxpayers will give up as much as $1.2 million if the City Council approves a $6 million loan to bail out the troubled Old Town Warren Theatre this week. That’s because that $6 million, which would pay off the theater’s debt and make it the only fully digital movie theater in Kansas, would otherwise be invested and draw about 3 percent interest a year.” 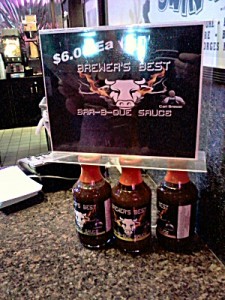 Warren’s theaters have received other financial benefits from the city under Brewer’s leadership, too. Then — and I swear I am not making this up — when Brewer started manufacturing and selling barbeque sauce, it was sold at Warren’s theaters.

What can we say about a mayor who is concerned about the appearance of impropriety when shopping for his personal automobile, but is not able to understand the problems with his own behavior in office?

That he feels he needs to shop for a car outside the city, but at the same time has no problem voting for overpriced no-bid contracts for campaign contributors and friends?

That he’s worried that a car dealer might feel he can gain something by giving the mayor a “special deal,” but votes to give millions to a campaign contributor, and then sells his barbeque sauce in that person’s business?

It’s difficult to understand or reconcile these two behaviors: Hyper-sensitivity to ethics when buying his personal car, as contrasted to total numbness to unethical cronyism that is against the law in some states and cities.