On Wednesday, the Tea Party Express stopped in Wichita for a rally. Quite a few people attended — more on that in a moment — and the reaction to the event by Wichita’s Left perhaps says more about them than the protesters.

On several online discussion forums, including the Wichita Eagle editorial blog, there was a great deal of discussion concerning the number of people that attended the event. Several seemed particularly obsessed with discounting the attendance figure reported by the Wichita Eagle, which wrote “Organizers estimated the crowd at 1,500 to 1,700. Police at the scene estimated it at 2,000.” One Kansas blog wrote about this in a post, concluding “So, for the Eagle to pump the numbers seemed, well, like they were pandering.”

I don’t know how many people attended this event, but accusations that the Wichita Eagle caters to the interests of conservatives — either the newsroom or the editorial page — are laughable.

Another criticism leveled by the Left is that the tea party protesters weren’t protesting when President George Bush did A, B, C, D, or E. Memory may be selective here, as many, such as myself, were quite critical of many Bush policies, and many did not vote for him.

But there’s no doubt that many people have had their political awareness heightened by the excesses of the Obama administration. In any case, for critics to charge that someone can’t protest now because they didn’t protest then is not a valid complaint. When is someone allowed to start being involved?

Besides, there’s a measure of irony in the Left criticizing people for failing to protest something they support — increased government spending. As mentioned here and elsewhere, Bush was the champion of discretionary spending.

Another cause of the Left — regulation — exploded under the Bush administration. The aptly-subtitled article Obama’s assertions to the contrary, the 43rd president was the biggest regulator since Nixon explains.

The fact that some of these protesters may just now becoming politically active leads to a scurrilous charge the Left loves to make: that these protesters are criticizing President Obama only because he is not the same race as the largely white protesters. Comments left to the Wichita Eagle article included “It may be that some of these ‘tea party’ people don’t think that a black man has the mental capacity to be a President.” Another said “the only thing that missing from the video was a confederate flag flying with a picture of Obama sporting a Hitler mustache.”

Contrary to our idiot former president Jimmy Carter, it’s possible to be opposed to nearly all of Obama’s policies without being motivated by race. All that’s required is reason and a love for freedom and liberty.

Charges of racism are easy to make, and making them allows the accuser to sidestep meaningful discussion of Obama’s policies while appearing to take the moral high ground at the same time. (By the way, a common protest sign seen during the Bush presidency was Bush with a Hitler mustache.) 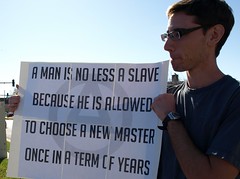 There is diversity of political thought among the tea party protesters. One of my favorite homemade protest signs quoted Lysander Spooner: “A man is no less a slave because he is allowed to choose a new master once in a term of years.”

Another young man carried a sign that read “minarchist.” I’ll let readers look up that term on their own, but it’s quite far removed from what most conservatives believe.

Some, maybe even most, of the comments left by tea party critics are hateful. One comment to the Eagle coverage read: “A lot of hate on this comment board. That it is coming from the ‘hope and change’ crowd tells you something.”

Sometimes critics are misinformed. One exchange in the Eagle article comments went like this: “‘Get a job and go buy your own healthcare like the rest of us…’ Yea, and what about those of us who are self employed and are DENIED healthcare???”

This self employed person may not be aware of the Kansas Health Insurance Association, which states its purpose as this: “to provide access to health insurance coverage to all residents of the state who are unable to obtain individual health insurance.” Many states have such an organization.

There’s also the controversy surrounding sponsorship or support of the tea parties: the charge of “Astroturf” or fake grassroots political activity. The Left’s constant canard is that there are “shadowy” groups such as Americans For Prosperity and FreedomWorks that run the tea parties. Since these groups don’t have to disclose their donors, all sorts of speculation runs wild. In particular, the connection between Wichita’s own Koch Industries and AFP is mentioned. Often an incorrect connection between Koch Industries and FreedomWorks is included, too.

I inquired about these connections, and I received this reply a Koch Industries spokesperson: “Koch Industries, the Koch foundations, and Charles and David Koch have no ties to and have never given money to FreedomWorks.

Regarding AFP, the connection with Koch philanthropic interests is well-known. Specific details are laid out in a recent Newsmax.com article. It turns out that Koch support for AFP and the AFP Foundation is only a small proportion of these organizations’ total funding picture: “Less than 5 percent of the funding AFP or the AFP Foundation has received in 2009 has been contributed by David Koch, Koch Industries, or Koch foundations.”

Furthermore, the AFP organizations have over 50,000 donors and 700,000 members. That’s a broad base of both financial support and membership identification.

While the local Wichita AFP office has helped facilitate some of the Wichita tea party events, it was not involved in the promotion or production of this week’s event except to mention it in emails to its members. Derrick Sontag, the Kansas AFP state director also spoke, as did a number of local speakers. While AFP has members from across the nation, only 24 states have local chapters. The tea party movement, however, is nationwide.

There is, however, one criticism from the Left that has some validity: When seniors on Medicare protest government health care, don’t they realize who is paying their medical bills? More about this issue in a future post.