By Paul Waggoner. This column first appeared in the Hutchinson News.

Listening too often to Topeka politicians and administrators can leave a normal person feeling rather jaded, even used. Or maybe it’s the reporting, sometimes I just don’t know.

Such was the case Tuesday reading the News report of Kansas Dept of Education Deputy commissioner Dale Dennis speech to the local Rotary club (Hutchinson News, April 18, “Ed Official: Fund Gap numbers shocking”). His talk was filled with boilerplate and themes typical of the education establishment.

Mr. Dennis made multiple comparisons and statements of fact to prove his points. In the article by the News own Mary Clarkin, Mr. Dennis set up a paradigm of school under-funding by noting that “in 1992 base state aid per pupil was $3,600”, while now it is only $ 3,852. If the amount had just been adjusted for inflation “it would be $6001.12”. Those cheapskate legislators!

The data on Kansas K-12 spending is easily accessible at the Kansas Dept of Education website ksde.org. Going back 20 years to Gov. Graves and 1997 you see total state funding of $1,815 million, rising to $3,950 million in 2016, a 117 percent increase! But the inflation rate during this period was only 47 percent, and the student count was up just three percent. Surprised?

Total spending (state/federal/local) is the best indicator of overall education financing. Plus you avoid disputes over how KPERS should be counted (whether state or local) and you get a genuine bottom dollar cost. 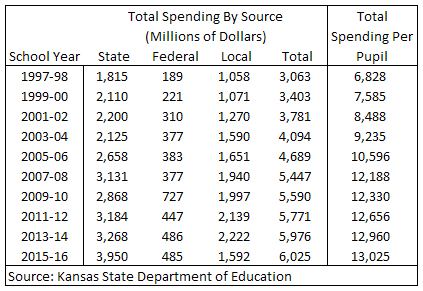 Many News readers need to let these numbers sink in. This is not spin, this is official data, Total spending went from $6,828 to $12,188 per pupil in barely 10 years.

Now Mr. Dennis was giving you a “fact” on base state aid, but he avoided telling our esteemed Rotarians that in the 1990s “base state aid” was 90 percent of the money Kansas provided our schools, but by 2005 it was only 65 percent of Kansas school funding, and in 2015 it was barely 50 percent. The ksde.org website listed over 25 different avenues state money now flows to local schools.

Ms. Clarkin of the News is an intelligent women and if some Department of Commerce representative came touting “shocking” job growth numbers in Kansas she surely would have noted evidence or context to the contrary. But Mr. Dennis utter factual inaccuracies go unchallenged.

Many seem to think it is “anti-education” to point out the real spending numbers. But to ignore the context of the 12 years prior to Brownback and the 80% increase in state K-12 spending is insane. Does any genuine public servant think that spending trajectory was sustainable?

The actual K-12 spending information is just a few clicks away from us for any school district or the state as a whole. The Rotarians of 2017 are a sensible group and will (I trust) rotate their minds with the actual data and judge accordingly.

But I, for one, am forever shocked (shocked!) by how disingenuous Topeka bureaucrats and our Kansas news media continue to be. And in that I expect I will have plenty of company as this legislative year moves forward.

Paul Waggoner is a Hutchinson resident and business owner. He can be reached with comments at [email protected]