No one is stealing* from KPERS

No one is stealing from KPERS, the Kansas Public Employees Retirement System. But there are related problems.

You don’t have to look for long on Facebook before you’ll find comments like these regarding KPERS, the Kansas Public Employees Retirement System:

“This is BS. Stupid Brownback robbed our pension plan; we have no real confidence that it will ever be paid back. Why don’t we have some kind of safety measure in place to prevent governors like him from stealing from us?”

“If the governor would keep his greedy hands off of the KPERS money that is there, we might not be having this problem. It was not set up as a lending bank when the Governor’s policies proved to be unworkable. Leave my money alone!!!!!”

These comments — and many similar posted all over Facebook — accuse Kansas state government, specifically the current governor, of stealing from KPERS. But that is not happening, according to Alan Conroy, KPERS Executive Director. By email, he answered this question posed by Kansas Policy Institute: “Can you please confirm that the Legislature or the Governor cannot and have not borrowed money from funds deposited with KPERS?

Conroy’s response, in part, was “Once funds are placed in the KPERS Trust Fund they cannot be withdrawn or ‘loaned-out’ to another entity or group. The only way funds come out of the Trust Fund is to pay the promised benefits to the members.”

That ought to settle the question of whether money is being “robbed” or “stolen” from KPERS.

But you’ll notice that the title of this article contains an asterisk. That’s because KPERS does have many problems. The most important is its underfunded status, which is a chronic problem. This is because the state has not made the actuarially required contributions. This is “stealing,” in a roundabout way. Who is suffering the loss? Not future KPERS retirees, as it is almost certain they will receive their promised benefits. Instead, it is future Kansas taxpayers who will have to make extra contributions to KPERS to make up for the current and past legislatures not making sufficient contributions.

This is one of the reasons why government should not offer defined-benefit pension plans. Because of the long time horizons involved, it’s easy to delay and postpone a solution to the future. Or, legislators are prone to make risky investment decisions as Kansas did in 2015. The state’s action simply replaced KPERS debt with debt the general fund is responsible for. This, of course, is the state selling $1 billion in bonds and transferring the proceeds to KPERS. It makes the KPERS unfunded ratio look better, as the governor and Republican legislative leaders continually boast. But it’s a risky maneuver, and it has led to undesirable behavior that was entirely predictable.

The plan was that the state would borrow $1 billion, and invest it. If the state earned more in investment returns than in interest cost on the bonds, the state wins. Barry Poulson, Ph.D., Emeritus Professor at the University of Colorado — Boulder has written on the danger of borrowing to shore up state pension funds, as Kansas has done. He explained there is the “lack of nexus between the investment of the bond proceeds and payments for unfunded liabilities in the plan.” This means that the borrowed funds may be used for current spending rather than for correcting the KPERS unfunded liability.1 What Poulson warned of happened in Kansas. 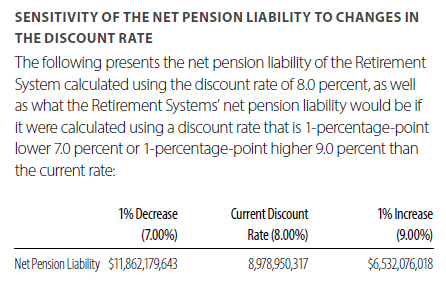 Some authorities believe that state pension funds should use a realistic discount rate, maybe four percent or so. That would cause the unfunded liability to explode. To its credit, KPERS recently adopted a discount rate of 7.75 percent, but that adjustment is not nearly enough.

Who will have to pay to make up the deficiencies caused by using an unrealistic discount rate? Future Kansas taxpayers, not KPERS retirees.

There was a time when money was really and truly stolen from KPERS, in a way. Under the leadership of former Kansas Governor John Carlin, it was decided that KPERS would make targeted, or direct, investments in Kansas companies. A scandal erupted, and KPERS lost many millions.2

Another source described the aftermath as this: “In total KPERS faced losses of at least $138 million from its direct investment program. Moreover more than seven hundred Kansas residents lost their jobs as a result of these failures — a striking contradiction to the stimulus purpose of the Kansas investment program. In hindsight the lack of professional oversight by KPERS of its private investments program was blamed for the failure of the direct investment program.”3 The chair of the KPERS Board of Trustees pleaded no contest to one felony count of aiding and abetting securities fraud regarding a KPERS investment.4

This sounds like stealing from KPERS. Despite this happening at the urging of Carlin, he now portrays himself as a leader, a senior statesman to whom we should listen.