Yesterday Robert Lawson appeared in Wichita to deliver a lecture titled “Economic Freedom and the Wealth and Health of Nations.” The lecture explained how Lawson and his colleagues calculate the annual “Economic Freedom of the World” index, which ranks most of the countries of the world in how the “policies and institutions of countries are supportive of economic freedom.” The conclusion is that economic freedom is a vital component of well-being, income, health, and both personal and political freedom. 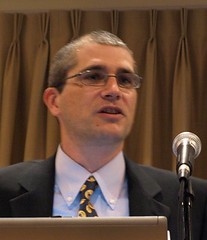 The Economic Freedom of the World annual report is available in its entirety at FreeTheWorld.com.

Lawson started his lecture by noting two methods of organizing an economy. There’s the way of Adam Smith, in which liberty, private property, and free trade are paramount, and government is to have a limited role. The other way is that of Karl Marx, where society would be planned and controlled by a central authority according to a national strategy.

Lawson said he became interested in measuring freedom as a way to investigate the truth of the claims of Smith and Marx. By collecting data about economic freedom, we could learn more about which system — economic freedom or planned economies — works best.

Lawson defined economic freedom as consisting of free markets, private property and personal choice; freedom to trade both within a country and foreign trade; freedom to enter markets; and security of property and the rule of law. He said that there is a role for government in this system to protect property rights and provide basic infrastructure, but the role of government is limited.

Measuring economic freedom is complex and multidimensional. Data comes from 141 countries using 42 components that are grouped into five broad areas: size of government, including expenditures, taxes, and enterprises; legal structure and security of property rights; access to sound money; freedom to trade internationally; and regulation of credit, labor, and business. Ratings are on a scale from zero to ten, with ten representing the most freedom.

Some of the components of the ranking are based on objective data, while some are subjective, perhaps from a survey. Lawson said that the report and book detail the methodology used in creating the index.

The result is that Hong Kong ranks as most economically free country. Singapore is second, which Lawson said poses a problem. Singapore is economically free, but it is not politically liberal in terms of civil liberties. There is a strong positive relationship between political freedom and economic freedom, but there are exceptions like Singapore.

The United States ranks sixth. Sweden is ranked fortieth, which is still in the upper quartile of countries. Lawson said that while Sweden has a reputation as a welfare state, the U.S. and Sweden are not all that different. Taxes in Sweden are about 50 perfect higher than ours, and Sweden has many more labor regulations, but otherwise the countries are similar.

China is ranked eighty-second, below the midpoint. Lawson said that China is a problem to rank, having Shanghai which is relatively free, and then outer provinces which are still tightly controlled and repressive.

Russia ranks eighty-third, right below China. Some of the former Soviet republics like Estonia are doing well, but the Ukraine has made little progress towards freedom.

India ranks eighty-sixth. It is not an economically free county, but is more free now than in the past, Lawson said.

Lawson said that a frequent criticism of free economies is income inequality. He showed a chart presenting the share of income earned by the poorest ten percent in each country, grouped by quartile. There is very little difference between the groups. “It doesn’t really matter what kind of economic system you have — free market or not — it does not correlate in any way with income inequality. It’s simply not true that market economies, in general, are more unequal.”

Is there a relationship between economic systems and the environment? Lawson showed a chart showing that the free countries do better in a measure of environmental performance.

Lawson said that political rights and civil liberties are also strongly associated with economic freedom, the example of Singapore notwithstanding. India is another exception, being a fairly liberal democracy but ranking low in economic freedom.

Speaking about the United States, Lawson said that the numbers are likely to go down in the future. While the U.S. ranks above the world average, its measurement of freedom has been declining since 2000. At the same time, the rest of the world is on an upward trend. “It’s no longer accurate to say the United States is among the very top tier in the economic freedom index,” Lawson said, adding that he blames George Bush for this. The decline is partly due to the increasing size of government, but the largest cause of the decline is in the area of property rights. This area is measured largely by surveys asking people how they feel about property rights in America. The perception, Lawson, said, is that the security of property rights are on the decline.

A question about the cost of living in countries was answered by the use of purchasing power parity.

A question asked how it can be that China and India are growing very rapidly, but still rank low in the index. Lawson answered that it’s the change or increase in the index that has been important for these two countries. There has been great change in both countries. “It takes only a tiny bit of relaxation to see a flourishing of growth in both China and India.” He added that both countries need to continue their reforms in order to maintain their rates of economic growth.

Lawson added that regulation, not taxation, is the biggest threat to prosperity and economic freedom in America.

Lawson’s lecture was sponsored by the Gilder Lehrman Institute of American History and underwritten by The Fred C. and Mary R. Koch Foundation.